In 2005 I started my first “blog” because it was fun. I didn’t know what I was going to do with it, though, so I deleted the picture of my dog from the first post and wrote something else with a different pictures.  I posted randomly on random topics.

In 2007 I started another blog. This one had a purpose: it connected me to other homeschoolers – other Catholic homeschoolers. In a world in which I felt incredibly isolated I discovered there were other people who had families that were similar to mine.  That second blog – a collection of random posts – connected me to an online community. Ultimately, blogging changed and my blog didn’t fit. I deleted it.

Since that second blog, a whole host of digital “meeting places” have sprung up, some of them disappearing just as quickly.  We Facebook, Tweet, IG, Snap, LinkIn our way across a digital world. In the process, our world becomes a curated depository of things and ideas “just like us.”

We become a curated depository of things and ideas that are “us.” Our heart “processors” pump a steady line of 1’s and 0’s through an intricate system of networks. We beat digitally.

And while there are some digital friends who make the transition into real human friendships, the majority of that world remains frozen in the blue light of our laptop, tablet, or phone. 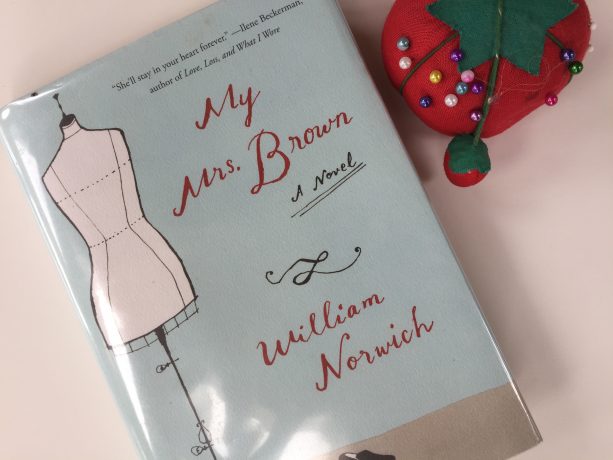 Against a digital background

It’s against this backdrop that My Mrs. Brown is devoured and praised. Mrs. Brown – My Mrs. Brown – doesn’t belong to this digital world; she refuses to be a part of it.  Her clothes aren’t made in factories by faceless enslaved workers half way across the world. She makes them.  Mrs. Brown doesn’t make a bucket list of #allthethings constituting a “full” life. She simply lives her life.

Mrs. Brown meets with her young friend, Alice, across the hall and eats a real meal and shares her life real time; not FaceTime.

“Everything is going to be okay in the end. And if it’s not okay, it’s not the end,”

This the advice given to Mrs. Brown by her friend Mrs. Fox and a bit of foreshadowing for us. Indeed, I think it’s the reason so many people have sung the praises of the book as a “fairy tale.”

I suppose to some degree My Mrs. Brown is a fairy tale: The plot travels an unbelievably impossible trajectory of one happy coincidence after another wherein Mrs. Brown unknowingly transforms the life of nearly everyone she comes into contact with and wherein she eventually attains her happiness as well.

Where is the magic?

But Mrs. Brown is never transformed. She’s never asked to pay for the gold that is spun for her; never asked to come up with an impossible name.  Mrs. Brown cooks and she cleans; but she is never baptized by the magic that transforms pumpkins into chariots. She buys her dress, is given her dress. But it isn’t woven by magic; only Oscar de la Renta.

The result, I think, is that we wind up thinking like Alice. That is, we approach the book as truth the way we “believe anything to be true. True until it’s not true.”  But a fairy tale is always true. Life doesn’t rely on a series of happy circumstance. It relies on magic.

Still, the book reaches us at that other level. We, like each and every character in the novel, live our lives digitally while simultaneously crave the human interaction of this life. Right here. Right now.  We are tired of pretending to be “baby dolls. Painted, silly, aging dolls. Women like us,” Irina Novikov says, “we’re treated like dead trees.” Mrs. Brown understood.

And so do we. We’re tired of make up; of making up. We’re tired of playing dress up: our homes, our lives, ourselves. We want to be real and touch real people. Touch the fabric and run a needle through our buttonholes. We want to sit at a small kitchen table with a smiling friend and discuss a New York trip with the lady sitting across from us. We want to see the sights, smell the smells, bump into the people of this world.

And so does My Mrs. Brown.

« Making Mountains out of Molehills: a 31 days series adventure
On the Tyranny of Noise »