In G. K. Chesterton’s Tremendous Trifles, the story is told of two boys, Paul and Peter. Paul had the ill-fate of wishing to become – and then becoming – a giant. He traipsed across the world to see Niagara Falls and discovered, that from his perspective, they massive falls looked like nothing so much as the water out of an ordinary tap.

He wanted to see the Himalayas, too, so he crossed the world to see them. But alas, he was disappointed. They looked like “the little cork rockery in the garden.” He continued to wander the world, hoping for something large to see. But nothing could satisfy his giant self and so he lay down in boredom where he was eventually chopped up by a Catholic backwoodsman. It seemed the Catholic had taken his philosophy quite seriously that “it can be maintained that the evil of pride consists in being out of proportion to the universe.”

But Paul’s friend, Peter, made the better choice. He chose for the fairy to make him a pigmy, about 1/2 inch high. Unlike Paul, Peter found his world large and vast. He set out on an adventure to cross the vast plains he found himself in, and has still not come to the end of it.

The irony of a such a large man seeing himself as a pigmy, is not lost on me. Nor do I think it’s lost on Chesterton! On the contrary, it proves his point as he attempts to show people what can “be achieved with a commonplace existence and the sacred spectacles of exaggeration.”

In short, I’ve been doing it all wrong. I am sorry to say it, but for too long, I have found myself to be a Paul. I am nothing more than a bumbling giant looking down on the things that surround myself. I am only thankful that I am awake before the woodsman found me. I am happy to report that my fairy has given me another choice.

I, too, have chosen to be small.

Or at least I’m trying to be small. Chesterton claims that “we may, by fixing our attention almost fiercely on the acts actually before us, force them to turn into adventures; force them to give up their meaning and fulfill their mysterious purpose.” I want to learn to do this. I want to join the Chestertonian school of thought, and make my own meager attempt “to show how many extraordinary things even a lazy and ordinary [wo]man may see if [s]he can spur [herself]f to the single activity of seeing.” Chesterton adds this “not unimportant fact, that molehills are mountains; one has only to become a pigmy, like Peter, to discover that.” 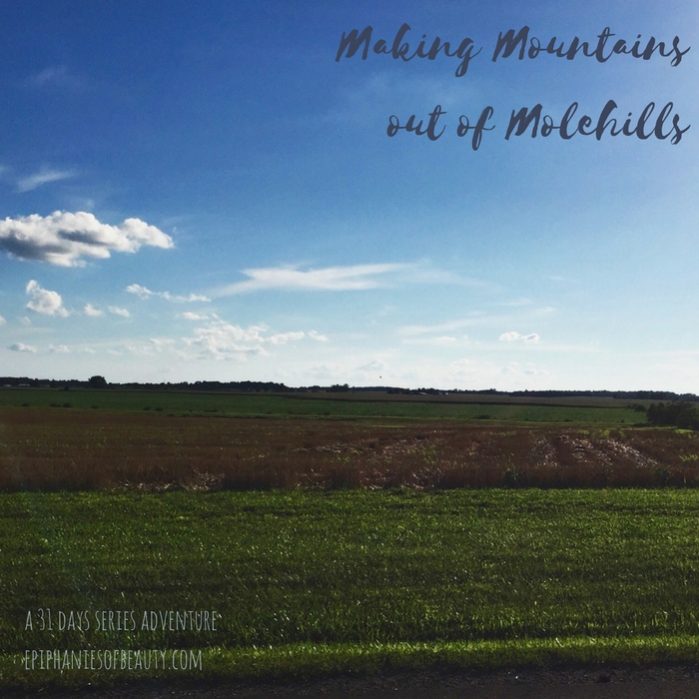 I want to see.

I’m not sure where this adventure will lead me. I only know that I am tired of forever trying to be the giant. I want to join the ranks of the lazy. “I will sit still and let the marvels and the adventures settle on me like flies. There are plenty of them, I assure you. The world will never starve for want of wonders; but only for want of wonder.”

So, beginning today, I’m setting out to become the pigmy. I’m going to make my attempt t0 post for 31 days about some adventure that has settled on me, like a fly. Monday’s are still book reviews, those flies have settled and I’m not interested in shooing them away. But who knows what other types of adventures will settle on me? I’d love for you to accompany me on this journey. Not only by reading along on my blog, but by sharing in the comments what types of adventures have settled on you.

In the meantime, bookmark or pin this post. I’ll add the links to each post in this 31 day series as we go along.

Making Mountains out of Molehills: a 31 days series adventure

This post is a part of a 31 Days Writing Challenge. For an overview of all the posts in this series, click here. If you’d like to learn more about this challenge or if you’d like to read how other people took their challenge, visit Write31Days.com.

« Search for the Hidden Garden | Book Review
The Magic of My Mrs. Brown | a book review »