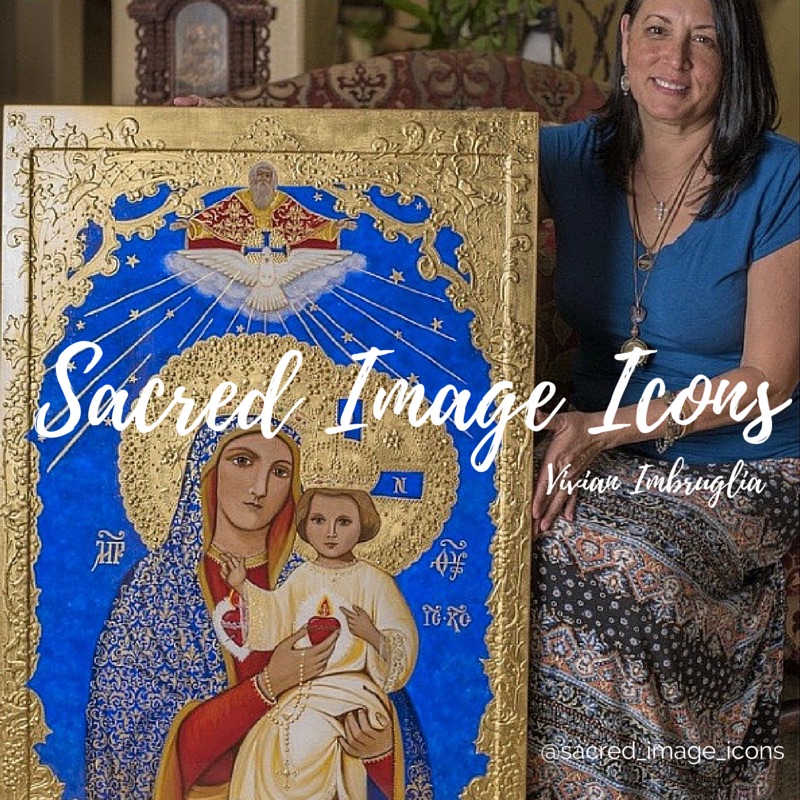 When Vivian Imbruglia was sitting in her parish, working on the Stations of the Cross printables she created for our 2016 Lenten study, she was approached by a short, elderly man. “What are you doing” he asked her. “Why?”

She was stunned – what do you say to someone when they approach you like that?

So she looked at him. And, says Vivian, “I pointed at the sky and I said, ‘I’m doing it for Him.’

“‘I wanted to know why you were doing this.’

Now, Vivian adds the letters, AMDG to each icon she creates. And she’s created quite a few.

It started about 10 years ago when her mother asked Vivian to drive her to an art class. Vivian said yes, of course; a weekly, standing appointment to spend time with her mother. Vivian walked into that iconography class and sat apart from her classmates; alone at the smaller table. And that first night she knew that this was what she was going to be doing. She was so certain, that the next day she went online and ordered every supply she thought she needed and more.

They went every Tuesday – every Tuesday for years. “It was a prayerful quiet time with whoever I was working on,” she said. Eventually, Vivian outgrew her instructor and moved on to study under two different master iconographers. It was there she really grew to learn the symbolism and deep spirituality of iconography.

Now Mrs Imbruglia is the one teaching a class (her original instructor has retired) and about 12 people come to learn under hertwice a week. She also shares her process with her Instagramfollowers.

But more importantly, Vivian stays busy creating icons for those who commission them. It starts with the Holy Spirit, of course. And from there Vivian researches the saint or situation she is working on, and prays. She might listen to stories about the saint she is working on, or a rosary. She also prays the Divine Mercy, but her favorite is the Iconographer’s prayer.

“Guide the hands of your unworthy servant; so that I may worthily and perfectly portray Your icon that of Your mother, and all the saints.”

Ten years ago, Vivian Imbruglia had never painted an icon – never studied art, really. But by saying, “yes” to her mother, her life has transformed in ways she never could have imagined. Vivian reminds us, “when the Holy Spirit nudges us we need to do what He’s asking us to do. Because so many blessing come from it.”