In 2015, I became a contributor to Heart of Mary Women’s Fellowship and in 2016 became a part of their executive team before stepping down that same year. Below is a reflection I wrote for a Lent 2016 series. It was originally published February 16, 2016. 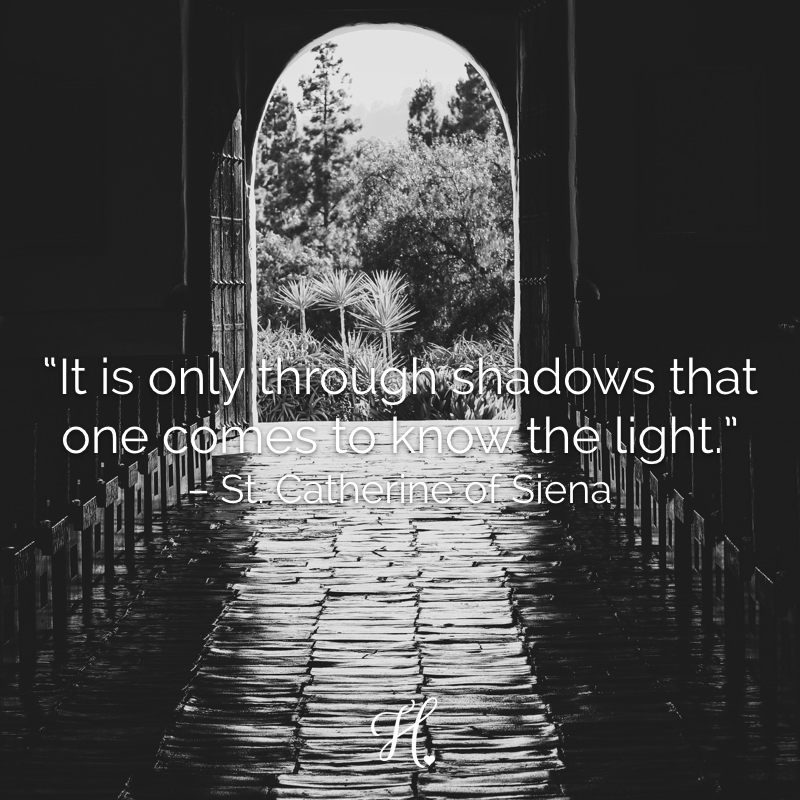 They say that it is the saints who choose us, and not the other way.  For today’s study, I like to think that it was Catherine of Siena who wanted to share about the Second Station of the Cross. At the second station, Jesus is made to bear his cross.  We, too, have crosses to bear. And St. Catherine of Siena is the perfect saint to show us how.

Born to a moderately wealth family, she was the second youngest of 25 children. At six years old, she had her first vision of Christ. St. Peter, St. Paul, and St. John the Evangelist surrounded him.  From that moment on, she seemed to be initiated into the way of life she would one day adopt – that of a Third Order Dominican, entirely devoted to the Love of God.  Her crosses soon followed.

One of the earliest crosses Catherine was introduced to was her family’s response to Catherine’s decision to live her life wed to Christ.  Her mother, especially, wasn’t happy and punished Catherine by forcing her to give up her room and to work day and night in service to the family. But Catherine, still just 12 years old, made a game of this, her first cross she would bear as the bride of Christ.  She set to work imagining that her father was Christ, her mother the Virgin Mary, and her brothers the apostles.  Thus was her first cross born.

Another particularly heavy cross Cathrine carried was occurred after she had gone to stay at the priory with the other sisters. There was another Mantellata, Andrea, who had contracted breast cancer.  The disease had spread so profoundly that it left an open and rotting wound on Andrea’s breast. If anyone came to visit her, they held their nose – certainly no way to console a dying person!  Catherine believed that taking care of Andrea was her work that God had given her, and began at once to take care of Andrea. She was patient with the woman and was careful to not let her face show any disgust or displeasure.

At first, Andrea was pleased. But as Catherine continued to come and nurse her, Andrea developed an ill-will toward Catherine that soon blossomed into hatred.  When Andrea received visitors again she began to spread rumors about Catherine, suggesting that Catherine was involved in “shameful pleasures” when she wasn’t busy nursing Andrea.  You can imagine how fast the rumors spread!  But Catherine bore her shame, even when the prioress and sisters converged upon her with accusations. She said nothing but

Worse for Catherine, when Lapa discovered what Andrea had been saying, she flew into a rage. Not that she doubted Catherine’s innocence, but Catherine was the recipient of the rage.

“Now you can see the reward of your Christian charity! If you don’t stop nursing her, if I hear tat you have so much as ben near where she lives, I will never call you my daughter again”

Again, Catherine bore the cross. She fell to her knees and pleaded with her mother.

“Mother, dear, sweet mother, do you not know that the ingratitude of mankind has never prevented God from pouring His mercy out on all sinners every day?..jThe devil has seduced her, but God may still send her light so that she may understand that she has made a mistake.”

Papa repented, and Catherine continued to nurse Andrea as if none of the scandal had ever happened. Eventually, Andrea did repent, and set about to correct the reputation she had so badly damaged.

Catherine suffered much during lifetime.  But in the end, they were crosses worth bearing.  Even on her deathbed, she counted the crosses all joy, and said as much.  In her last days, she had the opportunity to speak with

Fra Bartolommeo – her second confessor – and told him that God had allowed her to suffer for the Church.

“So that the Church may be liberated I suffer happily, and would gladly die for it if necessary.”

Jesus bore his cross for us, setting an example on how we might do the same; uniting our suffering to his for the good of others or, as in Catherine’s case, the Church.  Let’s use today to develop the habit of offering our suffering to Christ. If you have a notecard handy, take a minute to write down the following prayer and then stick it in a pocket, or some other hand place that you might easily read and pray it when a cross presents itself to be carried.

Help me to remember in these troubled times

The cross you carried for my sake,

So that I may better carry mine

And to help others do the same,

For the conversion of sinners

For the forgiveness of sins

In reparation for sins

And for the salvation of souls. Amen

« Surely He Has Borne Our Griefs
Flannery O’Connor and Zeus »