In 2015, I became a contributor to Heart of Mary Women’s Fellowship and in 2016 became a part of their executive team before stepping down that same year. Below is a reflection I wrote for a Lent 2016 series. It was originally published February 15, 2016. 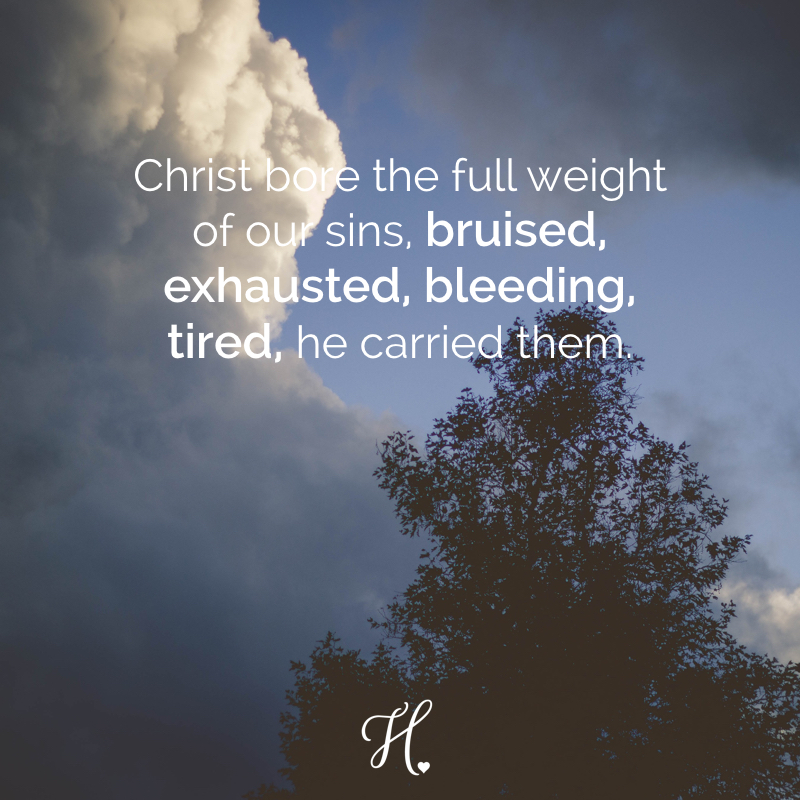 Surely he has borne our griefs

and carried our sorrows;

Yet we esteemed him stricken,

Struck down by God, and afflicted.

But he was wounded for our transgressions,

He was bruised for our iniquities;

Upon him was the chastisement that made us whole,

And this his stripes we were healed.

We have turned every one to his own way;

And the Lord has laid on him

The iniquity of us all.

Matthew 27:31 And when they had mocked him, they stripped him of the robe, and put his own clothes on him, and led him away to crucify him.

Luke 9:23 And he said to all, “If any man would come after me, let him deny himself and take up his cross daily and follow me.

We’re at the second Station of the Cross now.

In the first station, Jesus was condemned to death. He was mocked, spit upon, and crowned with thorns.  Now, they put his cross on his back.

Catholics aren’t a stranger to this mystery – it shows up in the Sorrowful mysteries of the Rosary – generally prayed Tuesdays and Fridays.  But we shouldn’t let our familiarity blind us to the gravity of such an act of mercy by Our Lord.

“Surely he has borne our griefs,and carried our sorrows”

Nowhere is this more evident than here, when he not only bears the physical weight of the cross he is to be crucified on, but he bears the weight of our sins, as well. Bruised, exhausted, bleeding, tired – he carries them. For us and for our redemption.

Yes, it was for us that he picked up his cross. And it is for him that we must pick up ours.

It’s easy to talk about – or even think about – in the theoretical. The small crosses that most of us come across every day are generally easy enough to hoist up and carry down the road.  Even some of the larger crosses seem crafted to bear more easily; an elderly loved one dies and we mourn their loss but it hasn’t come unexpected.

But what happens when the big crosses start falling into our paths; when a friend’s child dies, or a loved one is stricken with a terminal illness? What will our response be? Will we shake our fist up at the sky and question why? Will we demand an answer from the Almighty? Or will we pick up our cross and unite our suffering to that of Jesus Christ?

Our Lord didn’t promise a life of ease. Nor did he offer a life free of suffering. Indeed, he

“took not away the pains and sorrows which in such large proportion are woven together in the web of our mortal life. He transformed them into motives of virtue and occasions of merit; and no man can hope for eternal reward unless he follow in the blood-stained footprints of his Savior. “If we suffer with Him, we shall also reign with Him.”

Christ’s labors and sufferings, accepted of His own free will, have marvelously sweetened all suffering and all labor. And not only by His example, but by His grace and by the hope held forth of everlasting recompense, has He made pain and grief more easy to endure;

“for that which is at present momentary and light of our tribulation, worketh for us above measure exceedingly an eternal weight of glory.”(Rerum Novarum, para 21).

It’s why he commanded us in the Gospel of Luke, to deny ourself. To pick up our cross, and follow him.

Pope Leo XIII, in Rerum Novarum, tells us that Christ as “sweetened all suffering and all labor.”

Are we making it a habit to join even our small sufferings to that of Our Lord?

Is there a cross – no matter how small or large – in your life right now that needs to be lifted?

Take a minute to pray and ask Christ for the grace and hope to carry it. And then pick it up, uniting your suffering to his.

« Pondering the Passion with St. Catherine de Ricci
We Have Crosses to Bear »