In 2015, I became a contributor to Heart of Mary Women’s Fellowship and in 2016 became a part of their executive team before stepping down that same year. Below is a reflection I wrote for a series in Lent, 2016. It was originally published February 12, 2016. 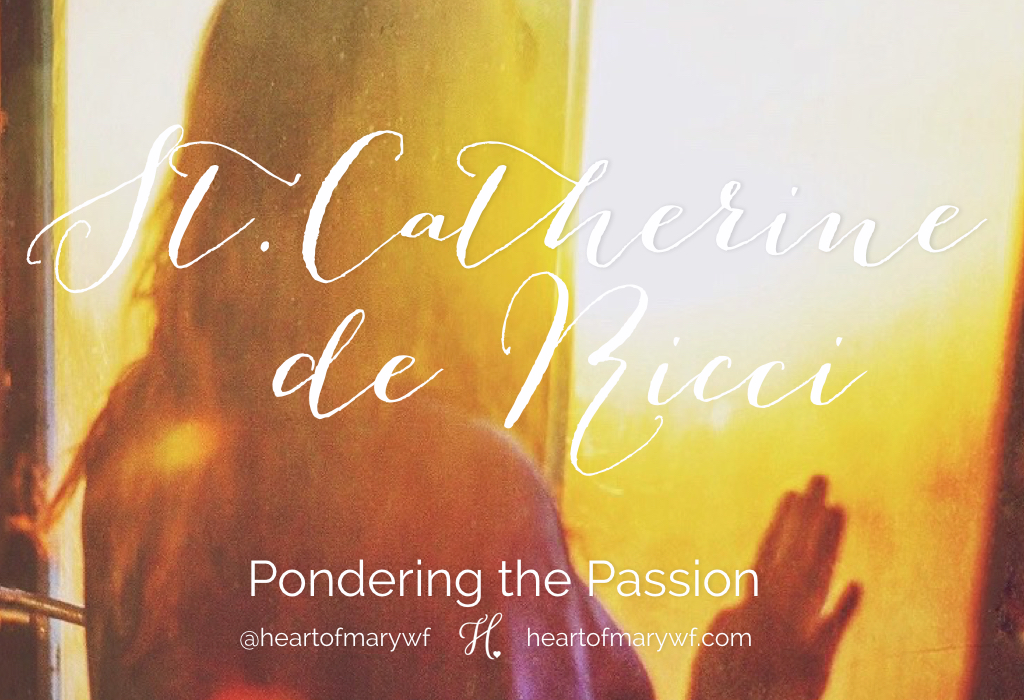 One of the many wonderful aspects of our rich, Catholic faith is the Church’s celebration of those who have gone before us.  It’s one thing knowing we are surrounded by a great cloud of witnesses, it’s quite another to be able to name and identify with a specific member of that cloud.

Yesterday we discussed the first Station of the Cross, Jesus in condemned to death, and so today we’re going to take some time to further ponder the mystery and also what Catherine de Ricci can show us in relation to it.

By way of quick introduction, Catherine de Ricci (nee Sandrina) was born on April 23, 1522. Her mother died when she was just 4 years old. Two months later, her father remarried. Sandrina’s father and step-mother sent her to a Benedictine convent, where two of her aunt’s were nuns, to be educated.  When Sandrina was just 9 years old, she was scandalized by an argument between two nuns (over a book on piety) and begged to come home. When she was 11 years old Sandrina had a chance encounter with a couple of Dominican nuns from a nearby convent. Her uncle was the confessor at the convent and, after a brief visit, Sandrina was convinced this would be the course of her life.  At the age of 13, despite her father’s pleadings, Sandrina took the Dominican habit and the name Catherine (after Catherine of Siena).

Catherine was welcomed immediately as her Uncle Fra Timoteo, was revered by the Sisters. The large dowry that Catherine brought with her and her family connections also made her a welcome addition to the community.  But it wasn’t long before the Dominican Sister’s changed their mind about Catherine.

Her “antics” proved too much for them to bear. It seemed that Catherine would act silly and childish. When confronted, she would answer that she was sleepy.  Thus, the good sister’s would send her up to her room to sleep only to find her later propped up in bed and rigid, impossible to arouse.  It seemed there wasn’t a cure to be found. They tried private and public scoldings, and even resorted to whippings, but there seemed to be no cure for Catherine’s weekly – for it was later realized these events would happen Thursday to Friday weekly – bouts of immature sleepiness.  She was seen as a half-wit: stupid and imbecile.

As it turns out – as I’m sure you’ve guessed by now – that Catherine’s weekly bouts of stupidity were nothing less than weekly ecstasies and these brought about by the contemplation of the Passion. And not just the contemplation of the Passion but a reliving of it.  Indeed, later we would find out that on Wednesdays Catherine would enter into a state of rapture where she would see a city, a place, a monastery, a room, a cell, a person. And after waking from the rapture “the whole flood of evil, of rottenness, of faithlessness, remains stamped on Catherine’s heart and she ‘begged the subprioresss to let her go away and pray for those sinners’” (XIV). All of this as if in preparation for her reliving the suffering of the Passion on Thursdays and Fridays.

Just as yesterday we pondered the condemnation of Jesus unto death and see in it our own part in this condemnation, we see the same today. Catherine de Ricci relived it weekly; seeing and feeling the full weight of this truth.

“She sees the evil, the error, the wounds that are there, and she sees them not as a spectator, but as one who is partially responsible for them” (xiv).

So what are we to do with this? Indeed, some of us may even be tempted to view Catherine in much the same way some of her contemporaries did: an eccentric to be viewed with some skepticism.  The answer is the same as it always is: to love God more.  Indeed, as with all of the saints the point is not the ecstasies she entered, or the miracles that may be attributed to her.

We can look at Catherine’s own life to see examples of this.  We see in her letters more prayers and admonishments to love God more.  She writes to her father, encouraging him to give himself completely to God,

“think how much he has suffered for you! And he has done everything out of the great love he bears to his creatures, so that we may be prompted to strive to love him more” (letter to Pierrefrancesco de’ Ricci March 21, 1542).

Catherine de Ricci lived nearly 70 years on this earth, the majority of it spent inside the walls of a convent in Italy.  Yet her soul reached the ends of the earth as the Lord allowed her to see – and then stamp upon her heart – the great sorrows of sin committed by his people.  It wasn’t just Pilate, wasn’t just the high priests, wasn’t the people of the time who condemned Jesus. It was us, too. Our sins reach to heaven and condemn Him.  And yet his mercy moves towards us that we might be redeemed.

As we sit at the foot of the cross and contemplate our role in it we should be careful not to despair. Rather, our response should be love. Too often, we are afraid of what this will mean to us. Will it cause us embarrassment? Too much inconvenience? Will we be forced to leave something behind?  Whatever your fear is, look to God for the answer. Pray to God that he might show us to love Him as we ought and for the grace to actually do it.