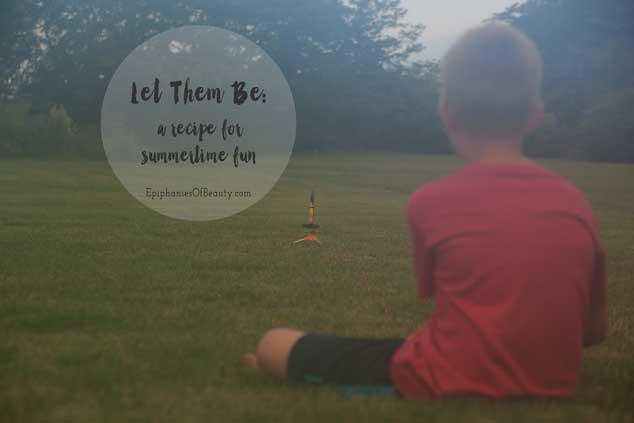 Summer is coming quickly! In the United States, summer’s unofficial-offical start is the last Monday of May, Memorial Day.  And although some kids continue school into the first few weeks of June nobody’s head is really there. Minds are off wandering in the summer breezes outside, traveling down mystical paths into the forest, and picking dandelion seed heads so that they can be set free into the great big blue endless sky.

It sounds magical, really. This dreamworld our kids create in their heads while not thinking about the schoolwork in front of them.  And that’s why I’ll be leaving that long empty days stretching between June and August empty. I won’t be planning to trick them into any learning: secular or spiritual.  I won’t be pulling out math workbooks, phonic workbooks, or CCD/PSR workbooks.

Instead, I’m going to be concentrating on rest.

As Catholics it should come natural to us to see Sunday as a time to rest. We’ve got the Sunday Feast day scheduled for us already! Of course, this doesn’t mean being slothful. And it doesn’t mean that we can’t prepare food, work in our garden, or putz around the yard.  But we shouldn’t be looking at Sunday as another day to squeeze in “all-the-things.”  It should be time to rest.

Leisure is the Basis of Culture, afterall.

Our family will be extending this concept of rest to the hot and hazy days of summer.

Oh things need to be done. Beds made. Gardens gardened. Baseball schedules to deal with. And other daily chores and what nots. There’s even an exhausting week of VBS planned.

But after that, we will have rest. We’ll have leisure.

I’m going to throw away the mental checklist of all the things that need to be learned or acquired during summer and we’re just going to let those kids learn and acquire on their own.

What will this look like? Well, most likely it will involve water. And of course a garden of some kind. Flowers will be picked and sweet peas sneaked.  There will be baseball, too. And Irish dance.

I think you get the picture.

See, I don’t want them asking me what to do. I want them running through the sprinkler or swimming in grandma’s pool. I want throwing a towel on the lawn and laying down on it to dry off. I want them staring into the big blue sky and, if there are clouds that day, making shapes out of the white puffs that drifts by. I want them down by the stream making up convoluted ways to catch crawdads. When it’s raining outside, I want them stomping in the puddles. I want them to have time to smell the rush of earth when the warm rains meets it after a dry spell. To see the steam on the street. To continue with the “great mud factory” of last week.

They’ll ride their bikes. And paint water color pictures on the back porch; leaving them out in the sun to dry until it fades them into blank pages again. Or until the wind blows them into the yard and the puppy chews them up.

I know! It’s tempting to fill their time with educational and spiritual plans to make sure they don’t lose anything from the previous year.  But there really isn’t any need.  The flowers proclaim the creator until we can see The Creator in all the things.

We don’t need to listen to Cat Chat or School House Rock each time we get into the car.  We need to relax, and trust that they’ll get this.  We need to give them time to realize the five leaf pattern on the rose bush, watch the Goldfinch as it flies away from the feeder in its undulating pattern.  We need to give them time to stand (or, ideally, sit) perfectly still next to the hummingbird feeder and watch as the friendly birds eat right in front of them.

We don’t need to go out of our way to visit shrines or civic landmarks. Pause on the way into church and let the children make friends with the Saints they see everyday.  Drive by the same old crooked tree/dilapidated barn/rundown building/house on the corner and let it become its own marker for familiar drives and quiet time to think. 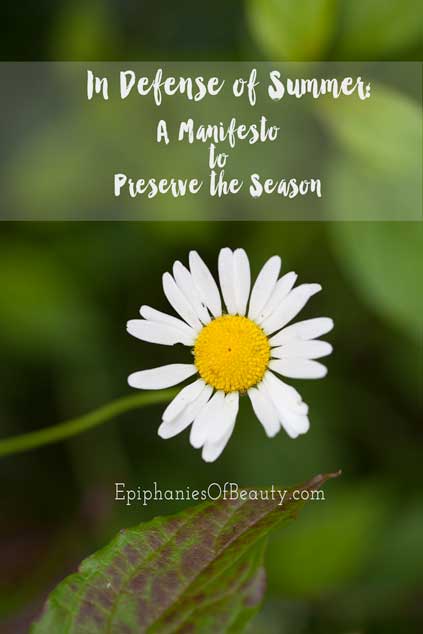 Listen. They’ve got this.

How do I know?

Because He’s got them.