Nicholas Allen is the kid who is too smart for his own good, manipulating situations just within the boundaries of what is good and allowable. But his 5th grade teacher is no slouch and is on to Nicholas and his tricks from the first day of school. Who has the stronger will? And just how far will Nicholas go to prove a point? Can he convince the world of a Frindle?

In the book Frindle, Nicholas comes to Mrs. Granger’s 5th grade English classroom with quite a history. He is well known by his peers for his (mostly) harmless classroom pranks and his ability to talk a teacher right through the final five minutes of class thereby saving the class a homework assignment. But Mrs. Granger isn’t a new teacher and the reader has the feeling she has seen boys like Nicholas before. When he attempts to have her talk through the assignment, she assigns him an extra assignment instead. An essay.

Of course, Nicholas Allen’s reputation is on the line now, and so he stages an all out war. What can one 5th grade boy accomplish in this world? Can he make up a new word? Convince the world to adopt it? Nicholas is determined to at least make an attempt! 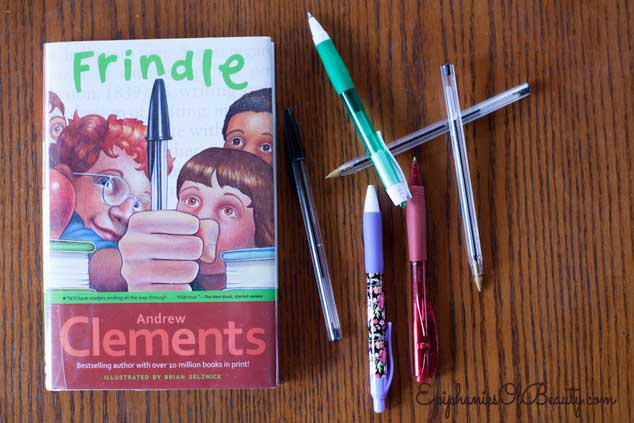 The reader laughs through all the antics and then right into the heart of the matter. It’s a heartwarming story that inspires everyone – especially small children – to reach for the stars.

It is no wonder this book is the recipient of so many awards. If any of your children haven’t read this book – even the older ones – you should have them read it now. It took me only an evening to plow through it as the text is large, the prose at a 3-5th grade level, and there are enough pictures to break up the text and keep it interesting for the younger set of readers. That last item should make this book especially good for those precocious new readers in the 1st and 2nd grade.