It is sometime in the future in a place once known as North America.  This new place – new country – is Panem and it is made up of a Capital surrounded by 12 districts.  Sometime ago, the districts staged a revolution against the shiny but cruel Capital and were defeated.  Now, to punish the districts and to remind the newer generations not to repeat the mistake, each district must send two children (one boy and one girl) to the annual Hunger Games – a televised fight to the death.  When 12-year-old Primrose Everdeen is picked to represent District 12, her older sister volunteers to take her place.  And now Katniss must fight, not only against the other children in the arena, but against her humanity, and yes, even – however quietly – against the Capital itself.

I enjoyed the Hunger Games. The writing is superb and moves at a comfortable pace. The plot is dark, yet brilliant.  But you knew all that and isn’t why you came here for a review.

Before I get the review itself, I’d like to point out the obvious context here. The Hunger Games is a dystopian novel. As such, it must be read in context: a comment on the current trends of society, following them to their extreme conclusion. 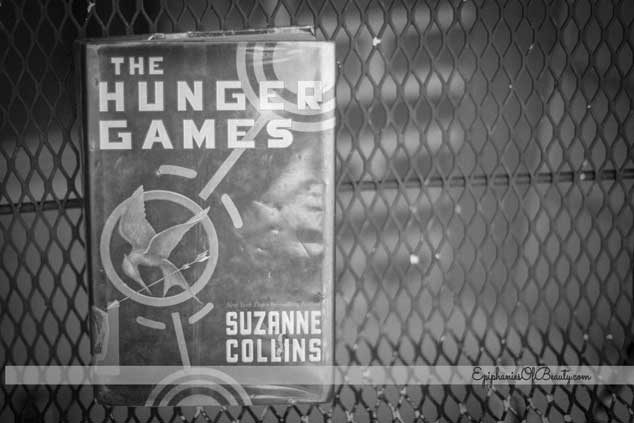 The future country of Panem is Godless, wiped clean of even the memory of any Christian names.  Beauty has been removed from the outlying districts, and is only present in the Capital in the false forms of glitter and excess. Truth has been altered such that even in the natural world animals have been altered into cruel and evil distortions of their original form.  And Love. In the Capital, everyone loves. Themselves.

Meet Katniss Everdeen. It is out of love that she risks her life to feed her family. And it is out of love that she volunteers to take her sister’s place in the Hunger Games.  Her District 12 opponent? Peeta. An acquaintance of Katniss’ that risked abuse from his parents to save her life many years ago, in the back alley behind his family’s bakery.

And it is this story line – a story line of love – that redeems this outwardly dark novel.  Never are we led to believe that anything that occurs in the Capital nor anything the Capital oppresses the district with are good. The Capital is the embodiment of evil, even as it glitters and shines and projects itself into the lives of its people.  Yes, we see evil acts of children killing other children. Yes, these acts are televised to the entire nation even as the outlying districts are forced into watching. But we never believe it is good. We are never asked to believe these things are good. Rather, we are asked to watch Peeta as he struggles to keep a part of himself whole – to prove “they don’t own [him]. [He is] more than just a piece in their games” (142). We are asked to watch Katniss, a superior hunter, as she struggles to maintain her humanity and not hunt her fellow “contestants.” We watch Katniss reintroduce humanity as she holds a dying girl in her arms and sings to her a farewell; as she places flowers on the dead girl’s body. Here, in Katniss, there is hope. Yes, Katniss kills. But generally only in self-defense, or in the defense of others.

If good is good, and evil is evil, than anything that blurs that line should be read cautiously. I noticed two such instances in The Hunger Games. Firstly, there is an instance where Katniss shoots a boy being mauled by dogs. The boy was nearly dead, and the act was presented as a mercy killing. Also, just before the end of the games, a suggestion is made that committing suicide may be a viable option to keep the Capital from winning.  While the plan is not carried out, it is not presented as an act clearly immoral. No. The ends do not justify the means. No, you may not commit evil in order to bring about a greater good.

Should you let your children read this book? I can’t tell you that. But I would say that you MUST read the book first. Yes, the entire thing. And then, please, for the love of Beauty, and Truth, and Love – discuss it with them.

The book is dark. But then, a world completely and utterly without God would be dark.

I have published a Catholic discussion guide for The Hunger Games. It’s available as a free download here.