About a month ago, Pauline Books & Media provided me a list of books and asked me if I was interested in reading – and reviewing – any of them?  On the list was The Wolf and the Shield, a new book part of a new series, “Friends with the Saints.”

“Saint books” – books about saints – are plentiful these days. My own parish boasts an entire shelf packed with books written for “young people”  about the saints.  But the series “Friends with the Saints” brings something new – and exciting – to the table. 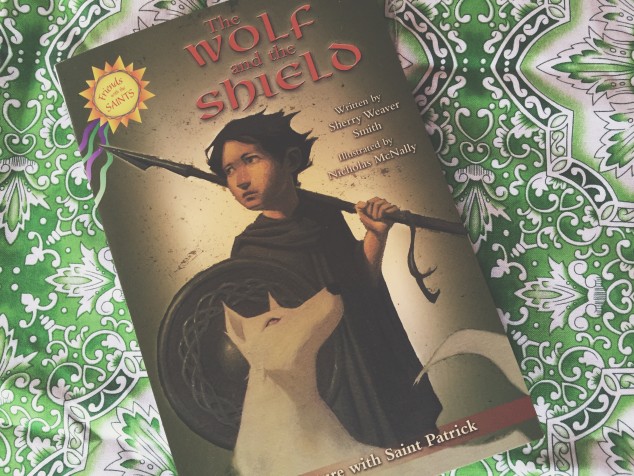 How, exactly, do “our friends in heaven” befriend us?

And that is exactly what Sherry Weaver Smith shows us in “The Wolf and the Shield.”

The book is an adventure story of Kieran, an eleven year old boy living in pre-Christian Ireland. Kieran’s father has been dead for two years now, and Kieran is afraid his mother will remarry.  Kieran would rather become a warrior under Carrick, the dishonorable and ruthless head of the warriors.

But while trying to prove himself worthy of Carrick, Kieran finds that there may be another kind of warrior who needs another kind of shield, and he is torn between two different paths. Should he follow Carrick? Find a new shield and charge ruthlessly forward? Or should he follow Patrick to Jesus? Relying on some kind of invisible shield of Love?

And what kind of shield is that, anyway, against the foreign clansmen?

Somewhere along the way, Kieran has found himself the unlikely caretaker of a small wolf pup – a dangerous proposition for everyone involved. How can Kieran protect the pup? After all he has done for the wolf, is it destined to grow up to hunt the clan’s livestock? And if Carrick and his men discover that Kieran is harboring such a dangerous animal, it will mean destitution for Kieran’s family.

What is Kieran to do? What can he do? And in the midst of it, a shadowy character asking him the deceptively simple question,

What does your heart hunt for?

To the adult, the question reminds us of St. Augustine who rightly knew that our hearts were restless, until they rested in Him.  But how often do we grant our children the privilege of asking them this same question?

And do we trust them to explore their own heart, to follow it as it searches for the only Shield that will truly protect?

The Wolf and the Shield does exactly this. It’s a wonderfully written adventure story wherein our friend the saint, Patrick, meets and guides young readers on their own dangerous path to peace.

** Pauline Books sent me a free copy of The Wolf and the Shield in hopes I would provide a (good) review. Free books aren’t guarantees of good reads, however, and my opinions are my own.