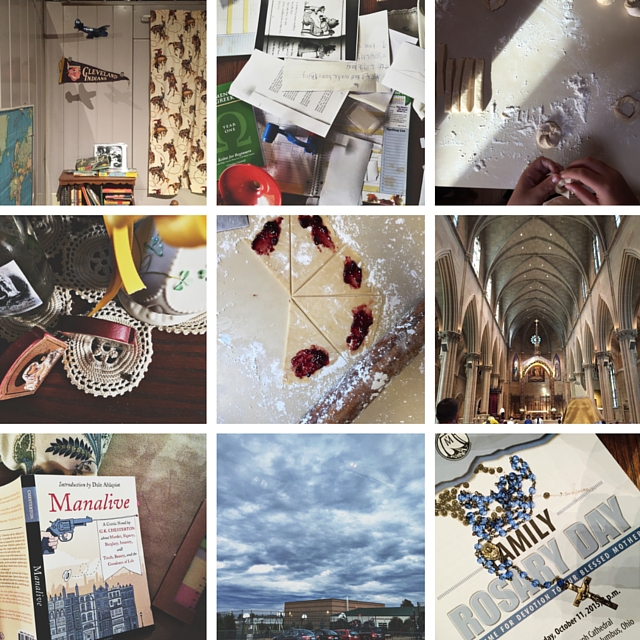 I’m in the midst of a lot of books right now. Not that that’s news. Or different than normal. Or that you should care.

It’s interesting to me, though, because it’s one of those times when all the books seem to go together, but like silk. So that as soon as I think I have matched them up and have found the words to talk about them, the books and their meanings and my words all slip away like the silk they are made of.

I’m going to spend my weekend trying to put it together. Or maybe just trying to be quiet and let them come together in their own way.  In the meantime, I’m leaving you with a few links.

If I had a bucket list, I would be able to check off “be a part of a live audience” because this past week I sat in on a broadcast by Fr. Wagner. He interviewed Elizabeth Ficocelli for his weekly “Wednesdays with Wagner” and they spoke about St. Therese of Lisieux. It was a good time by everyone, both “The Weavers” and us “non-Weavers” alike. And, I my interest was peaked in St. Therese. I know it’s awful to say, but she always struck me as saccharine and I had given up reading her. I’m going to try again.

Speaking of St. Therese, there’s big news this weekend! Of course, the synod is wrapping up and, fittingly, the parents of St. Therese – Louis and Zelie Martin – will be canonized. Here’s a great article on them, written by Fr. Antonio Sicari, O.C.D.  Also, they have a Facebook page. Because, of course!

One of the books I’ve just completed that’s bouncing around the inside of my head is Walker Percy’s The Moviegoer.  This quote

I have discovered that most people have no one to talk to, no one, that is, who really wants to listen. When it does at last dawn on a man that you really want to hear about his business, the look that comes over his face is something to see.

has me thinking about C. Pecknold’s article on The Dominican Option over at First Things. I attend a parish run by Dominican Fathers and, for my part, believe Pecknold is spot on in his observation. He notes:

When I see them in the white habits at prayer, or giving lectures, or playing guitars and banjos on the subway, I have a plausible image of a “contrast society” that is very much engaged with the world—an evangelistic witness which is joyful, intellectually serious, expansive, and charitable.

It’s a full weekend, friends. And I do so hope that you enjoys yours!