The man who wants to limit himself to what is knowable in exact terms is caught up in the crisis of reality: he beholds the withdrawal of truth 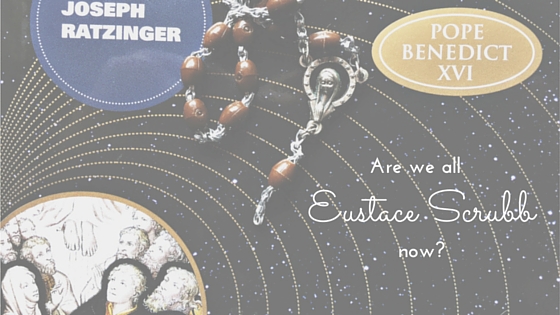 A favorite book of our family’s is D’Aulaire’s book of Greek Myths (library). It always strikes me that this is such a favorite: it’s a rather large muted yellow paperback copy, with faded illustrations that look vaguely seventies. The cover of ours is starting to tear off. I keep meaning to apply a good dose of packing tape to it, but as it hasn’t completely fallen off, the need hasn’t been of the upmost importance and so sort of flops around as the book gets toted around the house, shoved under the couch, or piled onto a nightstand.

We’ve tried other children’s version of the myths. One of my children took such a liking to D’Aulaire’s version that he read it through several times, and then asked for more books about the Greek gods.  Inevitably, the other books get pushed aside and D’Aulaire’s retelling gets another go around. Hence, the failing cover.

And next think you know, Percy Jackson and the Heroes of Olympus were flying through my home. And not just that series. All of the Riordan series. And once they were read, they were read again. And then the audio versions were downloaded and played in the background while the kids built with the Legos.

(This is not necessarily an endorsement of the Percy Jackson series. I couldn’t make it through the first several chapters of the first book before I closed the cover and walked away. The style of writing sends me up a wall. Which isn’t to say that I am not aware of the sudden character development near the end of one of the series. Or at least the end of that series as it sits now. Now doubt by next year there will be fifty more books…)

But this is a digression. Who, really, believes in these Greek gods anymore? I say Zeus and you think of thunderbolts and of unfair meddling into the affairs of humans and this from his cozy throne on a mountain somewhere in the clouds.

And barely do my fingers move across the keyboard when I realize that I say God and so many of our fellow men think of thunderbolts and of unfair meddling into the affairs of humans and this from his cozy throne in a city paved with gold somewhere in the clouds.

It seems there isn’t any room for God stories today. Have a good one? Now now…they pat you on the head and scoot you back over to your pew where you can sit and listen to God in the comfort of your own church. Let’s keep that stuff, there. MMMKay? “The context of the world is self-contained,” Joseph Ratzinger notes in Faith in the Future, (library)“and the hypothesis of God is no longer necessary for its comprehension.”

In short, we are all Eustace Clarence Scrubb – before his trip on the Dawn Treader (library) – now.

I already know what you will tell me if I ask you what a star is.  If you don’t already know the answer, you will turn to Wikipedia and have the succinct definition of “a luminous ball of gas held together by its own gravity.” You might want to include somewhere that it’s made up of mostly hydrogen and helium. Some of the more scientifically inclined – or those who recently completed a science report with their children – might go into some details of the nuclear fusions that actually hold the ball of luminous gas together.

But did you think to glance up at the sky in wonder, pondering your answer before you spoke?

Because, as the resting star Ramandu tells Eustace Scrubb during his Voyage on the Dawn Treader, “that is not what a star is, but only what it is made of.”

We search, but what we have found is lacking.

“The man who wants to limit himself to what is knowable in exact terms is caught up in the crisis of reality: he beholds the withdrawal of truth. Within himself he hears the cry of faith, which the spirit of the hour has not been able to stifle but has only made all the more dramatic. There is a cry for liberation from the prison of positivism…”

Yes. We need more than science. We need faith. We need a living faith to call our neighbors near. To show them freedom in joy, in belief, in faith.

But Ratzinger isn’t finished.  There is a cry, “too, for liberation from a form of faith that has allowed itself to become a burden instead of the vehicle of freedom.” With our tendency to look to Wikipedia for the definition and norms of practically anything, the habit starts to set in to approach our own lives in a similar fashion.

We determine if we have faith by a set of expectations. How many children in the family? Homeschool or no? Catholic school or public? Witness to the faith with the radio station bumper sticker? Have you prayed your rosary today?

And none of these are determining factors of a truly living faith. Of our life in Christ. Rather, Ratzinger reminds us that “faith signifies a breaking out of the visible and calculable into a wider sphere. Today, it still means breaking open the horizon and reaching out across all frontiers.”

And sometimes its the ridiculous frontiers that can bridge the gaps.  Of course there is no Zeus and he isn’t having a clandestine meeting with Io on the top of a cloud over Greece. But cloaked inside his thunderbolts and shenanigans are the everlasting questions that can open horizons and bridge to new frontiers.  He is a fractured ideal; a shadow of Truth pointing towards it.

And me? I don’t know what a living faith looks like. I’m trying it on as I go. Making mistakes and getting up and remembering that I can’t do it alone; I need grace. So much grace.  I’m staring at the horizon and reaching across a frontier; I’m sailing on a ship with a curious boy named Eustace Scrubb watching the stars grow up as they travel across the sky and all the while I’m living.

I’m living. And I’m alive. And by the grace of God, I’ve got faith.

(linking up to BlessedIsShe today)

(** I’m not denying the use of devotions, and especially I want to encourage following the precepts of the church. I am merely disagreeing that these externals are not accurate judgements of a person’s fidelity to the Church)

« Sacred Beauty in Picture Books: A Gift for Matthew
The Saturday Morning Post(ings) »