In the wonderfully written and beautifully illustrated “A Gift for Matthew,” a young boy takes a Saturday to visit an Orthodox monastery. While he’s there he’ll visit Brother Justin, an iconographer. In fact, the visit turns out to be somewhat of an apprenticeship.

The beauty of the icon, of course, is that it is a depiction of a saint “radiant with divine glory.” It’s no small task to portray a person with the same kind of glory that Peter, James, and John witness in Christ at the Transfiguration. As iconographer Aidan Hart describes in an article at The Way of Beauty, its an exercise that must first start in prayer as “Saints are alive in Christ, and can help the iconographer to represent them worthily.” 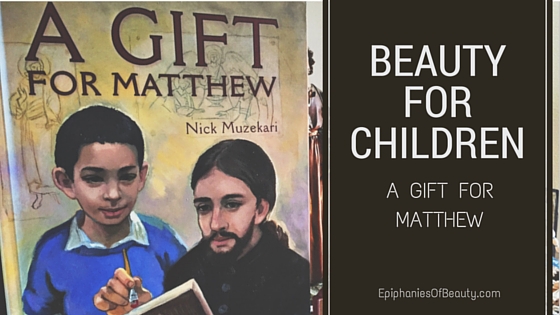 And brother Justin does just that. Afterwards, he and Matthew get right to work, the former showing the latter “how to transfer the sketch to the icon board using red ochre powder and a pencil.” And so begins young Matthew’s practice.

The story is alive with the process of iconography and doesn’t just serve as a non-fiction “this is how icons are made” book. Rather it’s a book that speaks directly to the heart of the child, and lovingly draws him into the wonderment of religious art. Again, we see Brother Justin showing Matthew just how to go about creating sacred art (one form of it, anyhow), and also the whys about some of the more specific tools and mediums used in the process. For example, when describing the pigments used in the icons:

“Pigment,” replied Brother Justin. “It’s what iconographers use to mix their icon paints. It’s made from crushed stones and earth…God gave the earth and stones their colors to bring wonder and beauty to the world.”

Indeed! And Nick Muzekari has used language to to bring beauty and wonder to a children’s book perfect for any Catholic library.

(I was sent a copy of A Gift for Matthew in hopes that I would review it here on Epiphanies of Beauty.  All opinions are my own.)

Iconography, of course, has long been a tradition of the Catholic Church, both Eastern and Western. Recently, however, it has enjoyed a surge in popularity in Roman Catholicism. If A Gift for Matthew piques your interest and you’d like to learn more about the process of iconography from a Western Tradition perspective, then I urge to take a look at David Clayton’s blog, The Way of Beauty. He co-wrote The Little Oratory (with Leila Lawler of Like Mother Like Daughter) and included in that book several stunning reproductions of icons he painted.

As a primer in iconography, and as a brief introduction to the differences in the Eastern and Western view on this form of art, I again direct you to Clayton’s blog. He wrote a terrific summary on “Just What do Catholic Believe about Iconography.”

If you’d like to paint your own icons, take a look at Techniques of Icon and Wall Painting by Aidan Hart. I’m not a painter, and haven’t invested in the tome, myself.  But it looks like its the curret defacto guide for those interested in an authentic teaching of the practice.

David Clayton other book, The Way of Beauty: Liturgy, Education, and Inspiration for Family, School, and College might also be of interest. 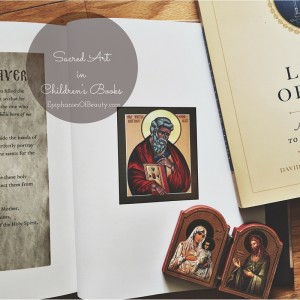 « Thy Will be Done
Ratzinger, C.S. Lewis, and Living Faith »