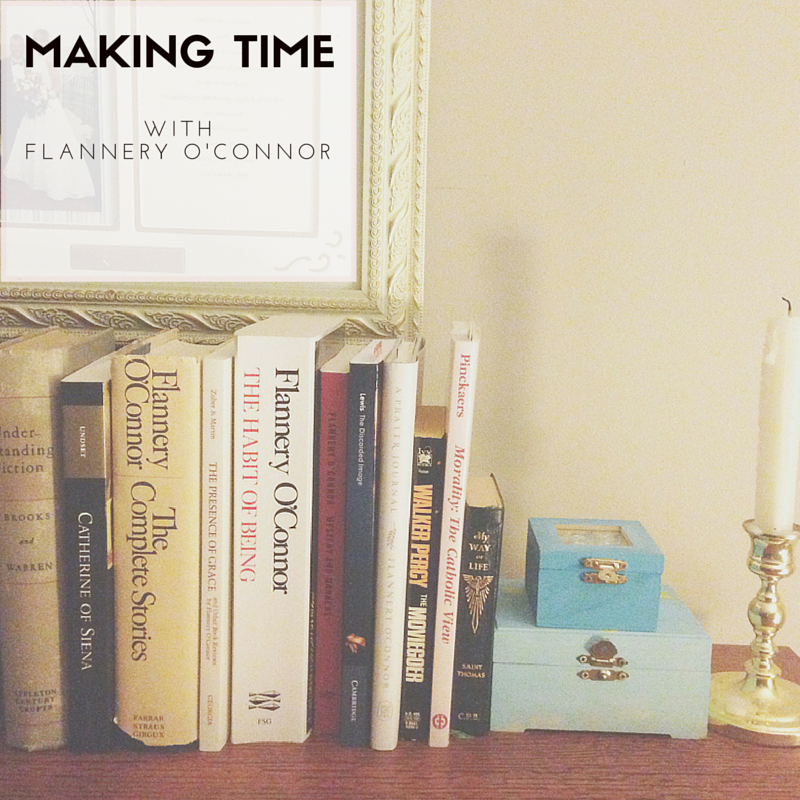 In The Habit of Being, (Library) a collection of Flannery O’Connor’s letters to her various friends, acquaintances, and associates; she opens the letter, dated August 2, 1955, to her friend “A” with the following:

Thank you for writing me again. I feel I should apologize for correspondence that you don’t have time for or that will become a burden. I myself am afflicted with time, as I do not work out on account of an energy-depriving ailment and my work in, being creative, can go on only a few hours a day. I live on a farm and don’t see many people. My avocation is raising peacocks, something that requires everything of the peacock and nothing of me, so time is always at hand.

Of course, her “energy-depriving ailment” was nothing other than lupus which would eventually take O’Connor’s life at the age of 36. Clearly O’Connor wasn’t one seeking to “make time” for her writing, or for her peacocks, or for anything else, right?  But in a letter dated two years later to friend Cecil Hawkins she writes the following.

I’m a full-time believer in writing habits, pedestrian as it all may sound. You may be able to do without them if you have genius but most of us only have talent and this is simply something that has to be assisted all the time by physical and mental habits or it dries up and blows away. I see it happen all the time. Of course, you have to make your habits in this conform to what you can do. I write only about two hours every day because that’s all the energy I have, but I don’t let anything interfere with those two ours, at the same time and the same place. This doesn’t mean I produce much out of the two hours. Sometimes I work for months and have to throw everything away, but I don’t think any of that was time wasted. Something goes on that makes it easier when it does come well. And the fact is if you don’t sit there every day, the day it would come well, you won’t be sitting there.

And that was it.  She sat in front of her typewriter and wrote letters, short stories, and two novels. So many letters that she had to apologize for too prompt of a reply. And with such ardor that some of what she wrote was eventually thrown away.

But writing isn’t the only habit Flannery O’Connor established. She read St. Thomas Aquinas before retiring for the evening. She recounts it, with some humor, in another letter to “A,” this one dated August 9, 1955.

I couldn’t make any judgement on the Summa, except to say this: I read it for about twenty minutes every night before I go to bed. If my mother were to come in during this process and say, “Turn off that light. It’s late,” I with lifted finger and broad bland beatific expression, would reply, “On the contrary, I answer that the light being eternal and limitless, cannot be turned off. Shut your eyes,” or some such thing.

Even with too much time, O’Connor understood the importance of ordering one’s day.  It wasn’t a matter of making time. Rather, of setting priorities.

If one wants to “make time” they must learn to cultivate the Habit of Being.

Linking up today with Blessed Is She

« Tuesdays at the Castle | Book Review
The War that Saved My Life by Throwing Me into a Pot of Water? »

This error message is only visible to WordPress admins