Quentin and Margo are next door neighbors and childhood friends. But they aren’t friends now. Not as seniors in high school. In fact, Margo Roth Spiegeleman doesn’t even acknowledge Q’s presence.  That’s why it’s such a surprise when she breaks into his room and convinces him to engage in one wild night of vandalism as she exacts revenge on all of those who hurt her.  And then, she disappears. Can Quentin follow the clues she left behind to find her? And will she be dead or alive once he finally gets there? And more importantly, who will he be in the end?

I don’t even know how to begin writing the review for this book.

When I read the last line I closed the book (then re-opened it to read the acknowledgments, I can’t help myself) and sighed at it’s ending.

I liked the ending. More or less.

I liked the beginning one third and the end one third, and wasn’t a fan of the middle.

But there is more to be said than yes or no. Read or don’t read this book. It’s good, or not.

I am not a fan of John Green’s writing style. I really don’t like it when authors dumb down the writing to sound cool and hip.  Listen, I understand that high school seniors use contractions. And some dialect is good. But conversations that are packed with “bro,” “honeybunnies,” or any other passing slang is just tiring to read.  Not only that, but it dates the book.

And this book contains enough of the good stuff that it deserves to live longer than the passing 20 years around which it was published. 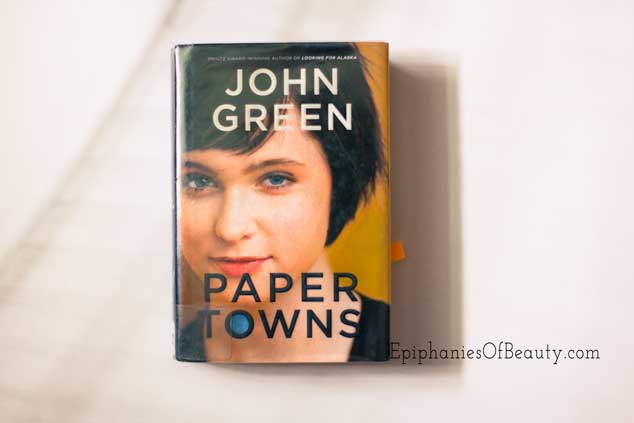 Paper Towns is a book that deals with who a person is.

It looks – via Quentin looking for Margo – at what it means to be human and fully alive. It looks – via Whitman’s poem “Leaves of Grass” – at the community aspect of living. In that sense, it’s a very Catholic book.

Or, in Quentin’s word, the “watertight vessel” we want them to be.

“…each of starts out as a watertight vessel. And…people leave us, or don’t love us, or didn’t get us, or we don’t get them, and we lose and fail and hurt one another. And the vessel starts to crack open in places. And…once the vessel cracks open, the end becomes inevitable…But there is all this time between when the cracks start to open up and when we finally fall apart. And it’s only in that time that we can see one another, because we see out of ourselves through our cracks and into others through theirs…Once the vessel cracks, the light can get in. The light can get out.”

There is some good truth here. We are wounded. All of us. And we would do better to look at each other through the light that leaks in through these wounds. Because, of course, the deeper truth in all of this is the painful truth about suffering. And about love.

And yet, there is something that lies between the words of the book that just doesn’t settle well with me. Green loves metaphors in this book – and can’t stop introducing new ones. “We don’t suffer from a shortage of metaphors.” Quentin tells Margo. “But you have to be careful which metaphor you choose, because it matters.”

And, of course, it does matter.

This is the part of the review where I need to transition to telling you the movie comes out shortly. That the book is a good one (minus the long and drawn out plot filler disguised as road trip). That, even though I am once again disappointed in Green’s apparent habit of saying something matters but then treating it as if it doesn’t, I believe the book is a fine one to read.

We don’t have to agree with the book to make it worth reading.

It’s a book ripe and ready to be “Catholicized.” That is, it’s a fine jumping off point to discuss with your own loved ones how important it is to “be who you are”. That suffering is redeeming and true charity conquers all. And, most importantly, that the metaphor you choose matters.

And that your whole life depends on it.