Salva is just 11 years old when he finds himself wandering East, out of Sudan. Alone.  Nya is in Sudan, too. Eleven years old and walking to the pond twice a day to collect muddy, dirty water for her family.  For both of them, it is A Long Walk to Water.

I am not sure what I expected when I picked up this book. Obviously – from the cover – it is based on a true story.  Set in Sudan, in the midst of war and poverty and destruction. In death and in despair.  And yet, out of all of it, comes hope.

But I am ahead of myself here.

A Long Walk to Water is actually two stories. It’s a middle grade historical fiction novel, and the two stories are relayed in different colored ink.  Nya’s story is told in red ink. And Salva’s story is in black ink.  I liked the effect.  And I especially liked it for middle grade stories.

At first, I’ll admit, I was bored by Nya’s story.  I couldn’t figure out what on earth it had to do with the larger story. Hers was the obvious reference to the title.  And I read the short interruptions hoping that she wouldn’t be whisked away by Sudanese fighters (for either side!).  It didn’t SEEM likely, but I just didn’t see how her story fit into the larger one. As such, I harrumphed my way through it. 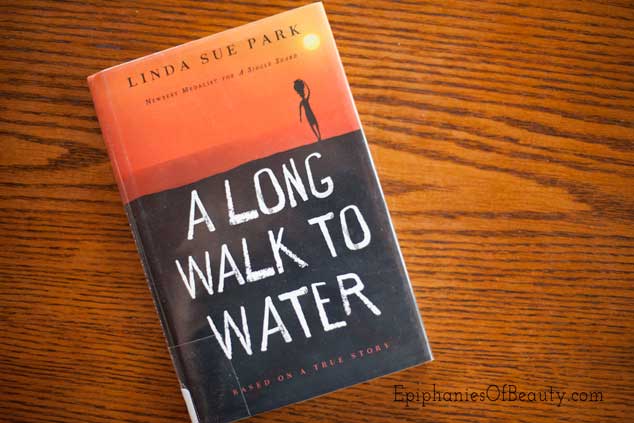 Salva’s story is tragic. And hopeful. It is the story of many other Lost Boys of Sudan. Many not as fortunate as he. It’s the story of war torn Sudan. Rebels fighting the Muslim government. Tribes fighting each other. And yet, Linda Sue Park never forgets her audience. Not once. We aren’t ever spectators to a graphic battle, or unjust killing.  We sometimes see the conflict leading up to it – see the guns of the aggressors, hear their angry words, feel Salva’s fear. But we don’t see the death. We don’t see the destruction.

We hear the gunshot fired. Sometimes we see the wound of another after death has already come. But we aren’t ever asked to witness the events as it happens.  For this, I’m thankful.  It’s hard enough to know it went on; hard enough to see Salva struggle.

The reading level is a bit at odds, I think, for the age group of the intended audience. It’s written at a fifth grade level, but I wouldn’t recommend it for the precocious children younger than that.  The subject matter is most likely appropriate at the middle school grades, and yet the reading falls below their capabilities.

So what does this mean? It means, mama’s, that if your child takes this book from the library, you should carve out the 1 1/2 hours it will take you to read it and do so.  It’s a powerful story full of courage, and hope, and mercy.  But it’s going to bring up some big questions. And I always like to be the one who is prepared with the answers when that kind of thing is brought up, ya know?

« Seven Books Easing Me Through Baseball Season
A Summertime Manifesto: In Defense of Rest »