Molly is an orphan who has bounced from foster home to foster home.  Now, with only a few months until she turns 18 and becomes emancipated from the system, she finds herself in trouble and with the very real possibility of being kicked out of yet another home straight into juvie.  To avoid juvenile detention, Molly takes advantage of the community service option and finds herself in the attic of Vivian, helping to clear out 91 years of accumulated stuff.  Things go in a different direction, though, when Molly discovers that she may have more in common with Vivian than she thinks. And as Vivian tells her own story of being a lonely child on an early 21st century Orphan Train, Molly finds more than dust packed up in those crushed boxes and old trunks.

I married into being Irish. That makes me nearly 100% Irish.

If you’ve married into being Irish – especially in an Irish town – you’ll understand that to be true.

That’s what piqued my interest in this novel.  That, and the title. Orphan Train. I had never heard of such a thing before.

Orphan Train is the story of two women. One just under 18 and the other just over 90.  It doesn’t look like they have much in common, but it turns out that they are both orphans of the same sort. And have both lived their lives in too many places as often invited but seldom wanted guests. As such, it touches on the human heart in a very real way – everyone wants to be loved.

Everyone needs to be loved.

And yet, in the end, I put the book down wishing for something more.  The characters were obvious but underdeveloped.  Indeed, we rarely see Naemh/Dorothy/Vivian’s hurt except through the plot line. I found this especially odd, as her story is told from a first person point of view. Vivians life was full of betrayal, abuse, and loneliness; and the younger part of her life was utterly lacking in joy. All of this is relayed – via 1st person – in a matter-of-fact-no-nonsense manner.  I can’t believe that after all these years there is no emotion left in any of her memories.  These same memories were so strong to her, so important to her that she stored them in her attic inside ratty old cardboard boxes and discarded trunks. Okay. So we know I was bugged by the first person point of view…. 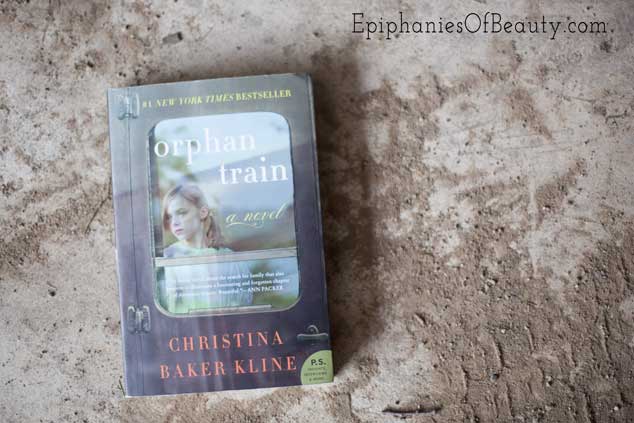 Also annoying is the author’s portrayal of the young girl’s current foster parents. While no other specific character – good or bad – is given a religion or political affiliation, Dina is pointedly a Republican Evangelical. And she’s rotten. I am, of course, Catholic before I am any political affiliation. And of course, that makes it impossible for me to be an Evangelical. So this isn’t personal.  Rather, it’s just bad writing.  I have suspended my belief to enter into a story and am slapped across the face with the author’s political and religious opinions.

Please! No need to slap me.

It was at this point, too, that I had to look at the spine of the novel to see if my library shelved it under young adult. The plot concerning Molly and her current set of foster parents felt like the whiny tale of a sullen teenager.  Except. It’s not a young adult novel and I believe the readers are supposed to empathize with her as “misunderstood.” It just didn’t work for me.

Orphan trains were a very real thing, and something I didn’t know anything about until I picked up this novel.  I was expecting the novel to be a powerful one, maybe even as powerful as its subject; as powerful as its title. Alas, it wasn’t and left me wanting more.

So should you read it? Yeah. I think so. It was a good read, however unsatisfying it wound up in the end.