Jessica is about to skip 3rd grade and join her brother, Evan, in the 4th grade. Jessie is thrilled! Evan knows everything about people, the one subject she just doesn’t get. But Evan, he’s not so thrilled. He knows how smart Jessie is, and is convinced she’ll make him look even dumber than he feels.  With one week left until school starts they aren’t speaking. A little bit of sibling rivalry turns quickly into…The Lemonade War!

I borrowed this book from the library because I read “Lost” awhile back, and loved it. Such is the life of a booklover, right? There’s always a new back-list to explore.

In this case, I’m going to be kept busy, I’m sure. 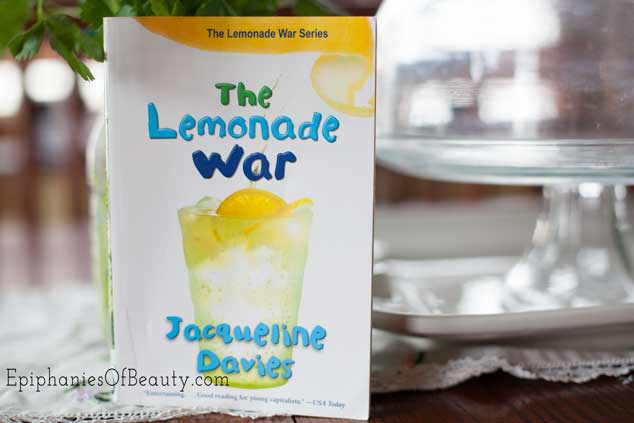 The Lemonade War is sibling rivalry at it’s finest.  Jessie is smart, but no good with people. And Evan is not as smart, but has excellent people skills. Together, they’re quite the duo.  But when Evan discovers that Jessie is going to join him in the fourth grade – skipping third grade altogether – he’s not thrilled. In fact, he quits talking to Jessie altogether.

Sure, he knows it’s not her fault, but that doesn’t stop him.  And soon, the two are arguing and next you know they are declaring war on each other and the contest is on! Who will earn the most money from their lemonade stand in this last week of summer? Jessie with her math skills? Or Evan with his people skills?

Each chapter leads with a definition from a business booklet owned by the children’s mother.  Terms such as Undersell, for example, are defined. And then  the ensuing chapter is an example – in lemonade stand style – of that business term.

But the book is so much more than that. It’s also the relationship of both Jessie and Evan as they realize they are either behind or ahead of the other.  It’s filled with remorse as they each miss the other, and pride as neither one is interested in giving up too soon. It’s a book about self-worth. As Jessie realizes it’s okay that she’s smarter than average and Evan learns that it’s okay that he’s not.

In the end, the book is about family. And familial love.  Eventually, Jessie and Evan make up. I’m not going to tell you who wins the contest.

So who should read this book? It’s perfectly clean, so those strong early readers? Those kids who can read a 4th grade level book but maybe shouldn’t read all of them? This book is perfect.  If you are looking for a fun way to introduce your child to economics, this book fits the bill perfectly.  My 10 year old knocked it out in an hour and then quickly placed the other books in the series on hold for him at the library.

« Maybe it’s Time to Stop Wandering
The Problem with NFP »