Cody meant to move to Seattle to live with her friend Meg. But then, she didn’t. And then, they had a falling out of sorts. And now? Well, Meg has taken her own life. And she left Cody to pick up the pieces.

I Was Here starts  out a little bit rocky. I had to keep turning back to the first few pages so that I could keep track of the time/space continuum inside Cody’s head.  Perhaps it was done on purpose, dealing with someone’s passing, especially one by suicide, is very much like that.

The novel is an exploration of the effects of suicide on those left behind. As such, it really is a good novel, if not terribly depressing. Cody, the suicide victim’s best friend, blames herself for “not being there”. Their friendship had gone cold for a few months and Cody finds herself believing  “if she had just…” Meg would still be alive.

Of course, you and I know that’s not true. That Cody shouldn’t believe that.  But she doesn’t. She doesn’t understand either one. 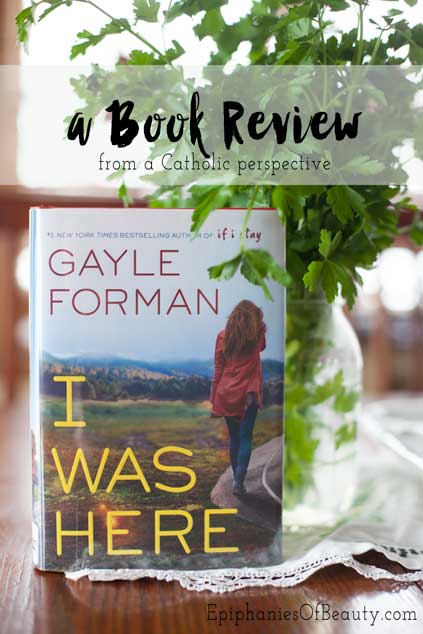 Thus, Cody’s struggle winds up taking her on a bizarre search for the “real killer”; an individual from an on-line suicide support forum. Only, “support” in this case means supporting a person through their decision to commit suicide. Yes, apparently such places exist. It is during this search for her deceased friend’s on-line confidant that Cody winds up searching for herself, confronting herself, and finding herself.

In fact, while on her mission, Cody searches for the father she never had, confronts Meg’s confident who seems inordinately adept at shining a mirror into a person’s soul, and then coming to terms with the life she actually lives. Life does go on for the living. And the living must live.

All of those things work fine in the novel.  It’s a page turner that has strong, young adult appeal.  But what else would we expect from Gayle Forman?

And yet, the novel is incredibly depressing.  You scoff now, because you ask me what else a novel about suicide can provide? And you scoff because I am asking the novel to provide an easy out; a happy ending.

But you are wrong in both cases.

The novel is depressing because the author, while taking the time to research computer hacking and suicide and police work, made no such effort to research assumptions about the Catholic church. A quick Google search will reveal there is no such thing as a “Cardinal sin”. That suicide is, in fact, a mortal sin, but that a Priest would never proclaim that someone has gone to hell.  Not today’s Church, and this is a book firmly set in today.

Rather, the model church in this book – the one set high and that offers hope – is the one that wears the bumper sticker “COEXIST”. At this, I weep.

And for Cody? Well, she loses her innocence – and her virginity – in this self exploration. And she comes out in the end released from guilt, and understanding that her friend suffered from depression. And Cody learns to live, too. But this new life is must be lived, apparently, “complicated and confused and in a wholly f-ed up way.”

Look. I’m sorry to say I know too much about suicide. But, however grisly a young adult novel would like to sound, there is more than a “f-ed up way” to live. Regardless of what a person has lived through. Looking at life in that way, results in a cynical epitaph, “I Was Here.” As if proclaiming that one existed and took up space is more important than proclaiming that a person is loved. And loved.

So listen, if your young adult has the book tucked under their arm, or in their pile of library books, take them aside. This is a good time for a real parent/child book club.  A time to talk about the dignity of a human person, about the perils of cynicism, and about charity.

There is always hope.