This book – The Mother-Daughter Book Club series – has been on my radar for ages. But since that day I first heard about it, I’ve blinked. And suddenly my own daughter is coming close to the age where she may find this book too sweet, too convenient, too juvenile and she’ll pass.  So when I found out the absolute very last book in this series is scheduled to be released early in 2016, I decided to dig in.  I thought starting now would allow me plenty of time to catch up casually in the series, and not feel the need to plow through them.

Except, I do feel the need to plow through them. I really enjoyed this book. I guess it makes sense, I’m a reader. And who doesn’t like Little Women? That’s a rhetorical question, by the way. You’ll be banned from website if you tell me you aren’t a fan of Little Women. So, you’ve been warned. 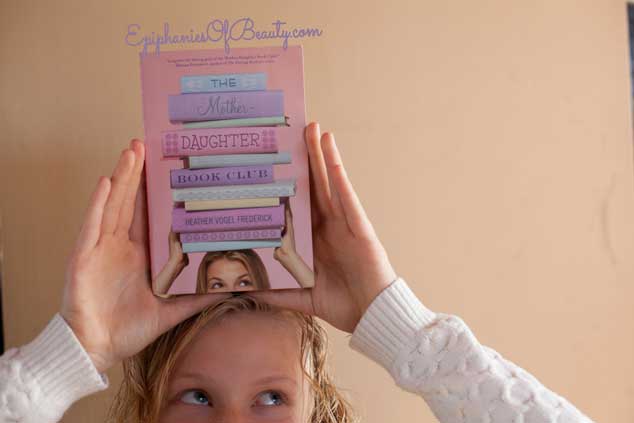 Okay then. So you know I love it. But that comes with qualifications. The book is told from the perspective of the four girls in the club: Emma, Jess, Megan, and Cassidy. I don’t mind changing point of view, when it’s done well. The trouble is, the voice isn’t particularly different from page to page or chapter to chapter. The only clue – aside from the chapter heading, and I usually ignore those – as to which girl is telling the story is what other character immediately surrounds her: friends, mother, father, siblings. But that doesn’t always happen until several pages into the chapter. As a result, I found myself, several pages into each chapter, turning back to the chapter heading to regain my sense of the story. It’s a real bother.

Also, the book is a tad sweet. I found myself scarfing it down, but the ending is a little bit too convenient. We have – on a magical trip to New York – each girl stumbling into larger than life opportunities for their dream careers. That said, if I was in the sixth grade, I think I’d eat it up. I dreamed of such opportunities when I was eleven and twelve years old. And, when you are young, what isn’t possible? What is it that you can’t dream up?

As far as content goes, it has the obligatory mean girls. As well, the girls are in middle school and have crushes on the older, 8th grade boys.  The mean girls are mostly verbally mean – calling each other names and such.  And from time to time play mean pranks on each other.  The crushes are handled well – that is, they are crushes mentioned in passing.  The awkward feeling of unrequited crush is explored, but not delved into too deeply.

A great read, then, for upper elementary and middle school girls. It’s great read for the high schooler, too, if you can convince her. As for me, I’ve started in on the next book in the series, Much Ado About Anne.