Kathleen O’Donovan fears she will never marry! She’s 19 now with no marriage prospects on the horizon, surely she’s doomed to be an old maid. That is, until she meets Karl, the young and debonair son of the police chief. And Karl likes her, too. A little too much. Will Kathleen realize it before it’s too late? Is there any hope for an old maid like herself to find true love?

Writing a review for A Subtle Grace is a daunting task: nearly as daunting as the 400 plus page book was as it stared up at me from its place on my nightstand. I needn’t have feared, though. The book read quickly and kept my attention. The novel is the second in the O’Donovan Family series. And, while I’m sure the first novel was interesting in its own right, it was a relief for me to be able to pick up this book and have it “stand alone.” All of the characters introduced themselves to me easily and soon enough I was right there in the living room, listening to the raucous boys fill the large home.

So. It’s good. At least, about 3/4 of it is good. In 300 of the 400 pages we have page turning suspense comprised of love, lust, revenge, and heroes. Well, meek heroes. And all of it is set against a late 19th century Catholic backdrop. So far. So good.

And yet, the novel doesn’t read smoothly. I think it’s those extra 100 pages mostly made up of interruptions to the story line. Gable repeatedly insists hitting us over the head with the characters especially pure motivations, or the religious implications of an action. I’d prefer she just show me how the doctor cared for Kathleen rather than write about how much it “bothered his soul.” I’d much rather see the characters react, watch their mannerisms and intuit their anguish, their grief, their joy. When Will is sitting in front of the Sacrament praying, for example, there are women cleaning the church. “Thankfully,” the author jolts the reader out of Will’s storyline, “they did their task with quiet reverence.” Would that the author did the same! 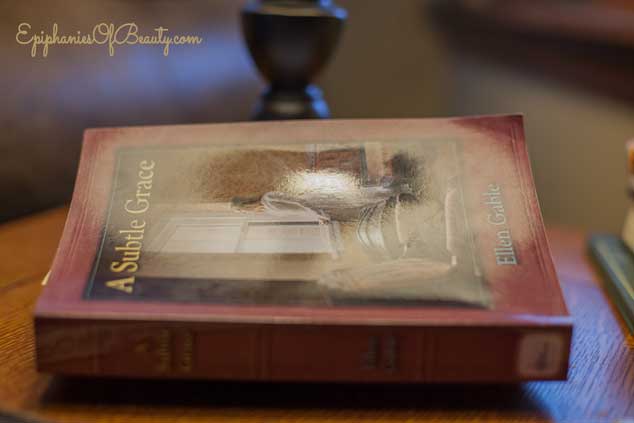 One more complaint about the characters. As a whole, they were overly pious. While we hear of the father’s former sin, and watch as it becomes a trouble for one his own sons, I wasn’t convinced he was capable of it. Indeed, when he has a brief outburst of anger, he immediately quiets himself down and apologizes for his “Irish temper.” But I want to see him get mad! I want to see him get really, really angry for what that (fantastically wonderful) villain did to his daughter. But I don’t see that. I only see his pious forgiveness. And I don’t buy it. Nearly all of the characters struggle with something – none are perfect – and yet, none of it is quite believable. As if they are given one – and only one – foible to prevent them from being perfect.  It wasn’t enough for me.

This was true for Kathleen, too. Her attack, and then her piety, reduced her from the bright and spunky character at the beginning of the novel into a docile and complacent girl-wife. I was disappointed that she let that villain steal her spunk. That she became a weak and frail wife to an overly quiet man dealing with bizarre issues.

Speaking of characters, let’s talk about the bad guy. Boy does Ellen Gable know how to write a villain! Also, she knows how to give it to him in the end. No crazy conversion here, just a good old fashioned “he got what he had comin’ to him.” I loved Karl. He may have been a bit over the top, but I cringed when I saw him coming. And I was nervous when I couldn’t see him at all. What was he planning next?

It seems to be a theme with Catholic books, then.  Some talented writers in need of some honest (and maybe brutal) editing. Also, maybe a bit less morality driven. The bones of the book are good! A Subtle Grace has a compelling storyline, and has great drama. If you’re the type that can skim through “the slow parts” (and I can!), and if you like a solidly “Catholic” book, this one may be for you.

I received a complimentary copy of this book. This did not affect my opinions of the book, or my review.