How does one tell the nativity story to a group of people who have no need of frankincense, gold, or myrrh? Or explain a shepherd to a group who has no need of them? A Catholic priest knew how. He put it to music, and with symbolism the people could understand. It’s called, The Huron Carol.

This book is a balm to the soul for so many reasons. I think the version I read is out of print, but there are other versions, and while the art might be different the message will be the same. 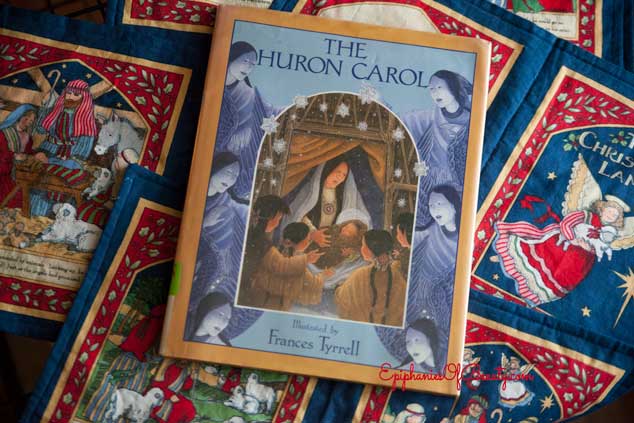 We so often hear of how horrid Europeans were to the native Americans.  But little is said of the missionaries – especially the Catholic priests – who cared for the souls of these people, and who treated the native Americans with the dignity of the people they were. St. Jean. de Brebeuf, a Jesuit, was one such Catholic priest. He committed his life to learning the Huron language, wrote a dictionary and translated a catechism to the indigenous people’s own language.  Perhaps he will be most remembered, though, for the Christmas carol he wrote.

The Huron Carol is the first book of a hymn composed by Jean de Brebeuf, a Catholic missionary priest living among the Huron tribe.  It was written in the Huron language. In it, he changes the surroundings of the incarnation, but not it’s message.  Native Americans weren’t shepherds – but there were hunter braves.  No wisemen in the area, but Chiefs.  What need has a member of the Huron tribe of frankincense, gold, or myrrh? But animal pelts?

Yes, those are worth something.

God incarnate, meets us where we are.

Of course, hymns are for singing, right?

Here is one version, sung in three languages: Wendat (huron), French, and English:

And here, another, with the more well known – and version that is in this book – with the words on the screen.