Raise your hand if you like feel good Christmas movies.  I thought so.  You’ll find 12 short story versions of just that in My True Love Gave to Me.

As with any short story collection, some are better than others.  If your taste runs like mine – and whose wouldn’t? – you’ve got 4 excellent stories, 4 that are good enough, and 4 that would have made the collection better by their absence. As I type that I wonder if I’m being a little bit harsh, but I don’t think so. Here’s the rundown: 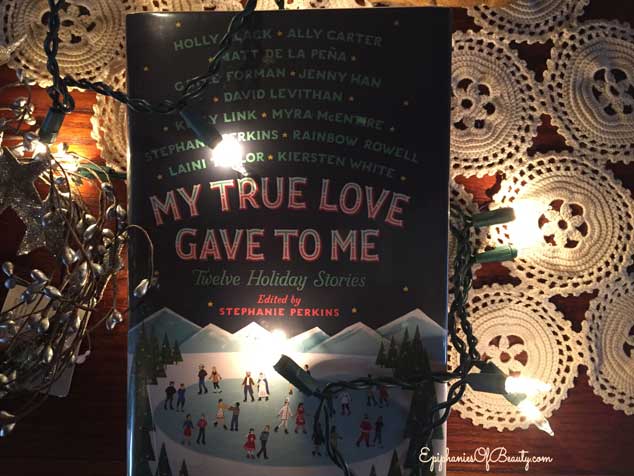 Midnights by Rainbow Rowell: This was my first introduction to Rowell. The story was entertaining, but not a page turner. All’s well that ends well, though. So it’s a keeper.  And I’ll be picking up Rowell’s other novels at some point, too. My curiosity is peaked.

The Lady and the Fox by Kelly Link: A fairy tale but with a starlet mother who gives joints to her son.  That was cynical, I apologize.  The fairy tale bones are in this story, good wins. Love wins.  But there’s a lot of muck to read through to find it. Meh.

Angels in the Snow by Matt de la Pena: One word. Amazing. Maybe even Ah. Maze. Ing. This story is written from the heart. Pena’s knows how to portray the craziness of family at a holiday. The fights, the food, the love. And he can portray hurt and friendship, and poverty, and hope, too. Really good at the hope part. I loved this story and will absolutely be looking for Matt de la Pena’s other work. Don’t miss this one.

Polaris is Where You’ll Find Me by Jenny Han: What would it be like to be an adopted child of Santa Claus? Hello?!? I know you asked the question yourself when  you were a child.  Warning, it might not be as wonderful as you supposed.  But the elves will help you out.

It’s a Yuletide Miracle, Charlie Brown by Stephanie Perkins: This story was all over the place.  I learned that it’s not just Catholics/Christians who are didactic in their fiction.  Perkins makes it clear that Asheville, NC “loved anything organic” and I can totally get that. But later, North (the dude from the Christams tree lot. Cheesy, but it works!) interrupts the story with his driveling about the benefits of a real Christmas tree as opposed to a plastic one.  Too didactic. Too preachy. Too much interruption to the story line!  Which was otherwise good, but slow. I will say, bonus points to Perkins for having Marigold (our protagonist, and daughter of a pagan) happy that the boy has come into her apartment – to help set up the tree. She comments that he’s there “in the flesh” and that it makes her happy. Even when pagans stumble upon the Truth, it makes them happy. Gotta love it.

Your Temporary Santa by David Levithan: This story made me feel uncomfortable. I was privy to the thoughts and feelings of a young gay man as he goes to his boyfriend’s house on Christmsas Eve.  Did I mention that he enters the house when everyone is asleep? and that he’s dressed as Santa? It’s for a good cause, this will be the youngest sister’s last year to believe in Santa and, by extension, believe in anything at all.  Poor Santa! He is alone and broken and wants love more than anything. In the end, he crawls into bed with his boyfriend and cuddles. But it’s with a resignation that can’t be described as joyful.  This story isn’t Hallmark material. But, I guess as Catholics we know that already.

Krampuslauf by Holly Black: Ugh. Not sure how this one made the cut.  And what’s with the insistence of making Christmas a dark holiday.  Here we have a teen willing her life to change (a good thing!) through celebration of the dark side. It’s creepy.

What the Hell have You Done, Sophie Roth by Gayle Forman: It took me a little bit to make my way into this story. It wasn’t going well.  By Sophie meets Russell and the story picks up. Definitely Hallmark material here.

Beer Buckets and Baby Jesus by Myra McEntire: All I can say is this: the title is a dare. Please take it and read the story. It’s wonderful. Sigh.

Welcome to Christmas, CA by Kiersten White: Maria is stuck in the most boring non-location ever. Christmas, California.  Life at her waitressing job in the family diner is miserable. Until a young and dashing cook enters the kitchen. His food is magical and the town – and Maria – start to change. Sigh.

Star of Bethlehem by Ally Carter: Everyone wants to be loved at Christmas. And sometimes, it’s lonelier when you’re surrounded by fans. So when Liddy takes the chance to escape to Oklahoma for a Christmas break. She does. Can you see the plot line a mile away? Absolutely! But the story is great anyway. It’s Hallmark!

The Girl who Woke the Dreamer by Laini Taylor: I can’t believe this story was put last in the book. It almost ruins the collection, I think. It’s a twisted fairy tale. Yes, the poor orphan girl winds up marrying a god. But not in the Percy Jackson/Olympic God/Roman God way.  It seems this “Dreamer” was here forever. He made everything (but man, men make themselves) and was around before man could invent the term “god”. He’s dark – dark eyes, dark feathers, dark magic.  He, of course, is better than the cold, hard, calculating Reverend.  The Dreamer, and his brothers and sisters, “cared nothing for worship or thanks. Only for the act itself: creating.” Sigh. Stories like this are ultimately just. so. sad. They miss point. And to miss the point is a collection of Holiday stories is really a tragedy.

This book is an obvious fit for cheese lovers everywhere. Seriously.  I know it’s “young adult” but that’s just a label on a book. You know that right? And a character who happens to be not-adult.  Except, many of the characters in this book are college aged, which seems to me to be just above the “young adult” age level anyway.  But no matter.  Mom’s can read this, too. And most mature high school students. Skip the yucky stories, I just don’t think they’re worth suffering through the reading of them. They’ll taint the mood. Who wants to be jarred out of that reverie that comes with a good book, a blanket, and a fire in the fireplace?

Oh. And don’t forget the eggnog cookies, and a cup of hot chocolate. Marshmallows and peppermint are optional.

« Epiphanies Of Beauty | Messy
Happiness vs Holiness: you can keep your Facebook meme »