1) Did you see the article at Ethika Politika on “What’s Wrong With Contemporary Catholic Fiction” this week? I have mixed feelings about the article. Namely, yes! The problem with Catholic fiction is that it’s, well…Catholic.  When people harken back to the good ole days of Chesterton, O’Connor, Waugh, and Percy. Oh! Don’t forget Greene! – they seem to forget that none of those authors inserted into their stories a nice and tidy moral tale of a Catholic conversion. Okay. Well, there is that whole Father Brown thing going on with Chesterton.  But even he – with the Catholic-priest-as-main-character didn’t preach. They wrote to tell a story. Their work is Catholic only in the sense that they are. And I use the word “only” lightly. 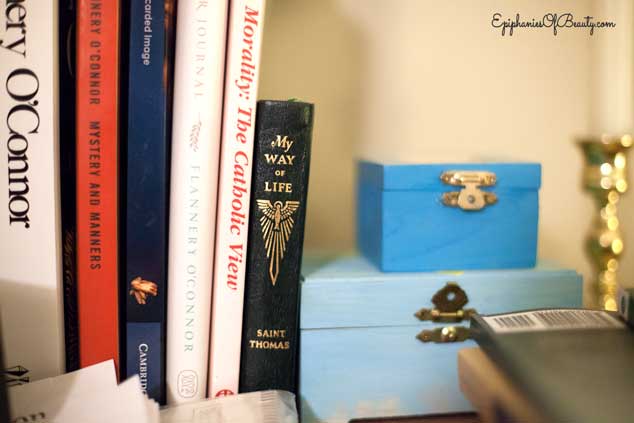 2) Also. It should be noted that O’Connor was criticized in her day. People weren’t extolling her for “being a good Catholic writer.” It’s so easy to romanticize the past and look at her as this great, virtuous writer.  And yet, if we lived in the day we’d likely be complaining it’s too dark. Oh wait. People are doing that still.

3) Catholics. If you want to write a story. Write it. But please, for the love of all that is holy – especially art – quit preaching.

4) Here’s another thing. We aren’t in some kind of literary desert. Or in any more of a desert than we have been in times past. Just because it’s “today” doesn’t mean it’s boring, meaningless, dull, scandalous, without hope, evil, or just bad. There is good literature being published. It just might not look like the Brothers Karamazov or Billy Budd. Believe me, I read Billy Budd and it’s highly overrated.  Again. Books don’t have to be 30+ years old for them to be good. I know you think you are somehow using this 30 year time period as your happenstance curator. But it doesn’t always work.

5) Also, traditional publishing can be a good thing. I mean, sure, there is the argument that if you don’t fit the mold they won’t publish you. But Ron Hansen is published. Will people 100 years from now be hailing him as the Catholic author of the century? Rhetorical question, I haven’t read enough of his writing to weigh in.  But just wait, I’m sure I’ll have an opinion on it eventually.

6) Gatekeepers can be good. I’m sorry to report that it has been my experience that Catholic fiction is probably not being published for one reason: it’s not good enough. The gatekeeper has one function: to guard the gate.  He/she opens it for one reason it’s good enough to sell; which translates that people will like it well enough to purchase it. It’s easy to lament “they” just don’t know. But again, Melissa Wiley is published.

7) A final observation. It would seem that business should be booming for all freelance editors and proofreaders what with all the independent publishing going on.  I don’t know of any, so I can’t say for sure.  But if you are a writer, and you are thinking about self publishing, please consider helping out the economy and hiring an editor. Your friend can maybe be your proofreader, but not your editor. Not even when your friend is an editor. You need someone who will tell you the hard things.

I don’t know. I’m sorry if I sound too snarky. But we Catholics keep walking around with our head down looking at our toes and wondering why no one is reading our books? And lamenting about the state of literature and pretending it has nothing to do with us. With our literature. The golden age is only the golden age in hindsight. And it’s not too late to make this a second golden age. Just write! Write the story that is begging to be told, not the moral tale you are trying to teach your teen.

So. I’m pretty sure the rest of the 7QT crowd isn’t so snarky this week. You should click over and read what they have to say. It’s normally hosted by Jennifer Fulwiler (I know you know that already), but this week it’s hosted over at Kelly’s not-lyceum again.  Join in.