This is the story behind the first Thanksgiving.

So, I homeschool. And here’s the dirty little secret – I’ve never read this book before. Ever.

And also? My life would have been fine without it.  I know my oldest child hasn’t suffered from missing out on the picture book, even if it is a Caldecott honor book.

Don’t get me wrong, I love the drawings. 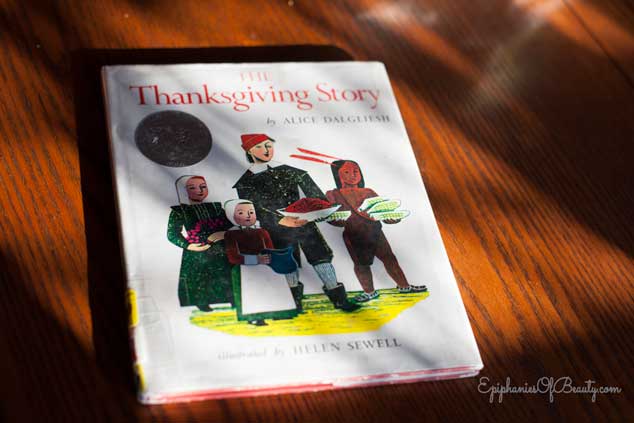 But! it’s not a cozy picture book. It’s fact filled and reads well enough, even out loud.

Maybe the book is just dated? It was first published in 1954.  And the story reflects that. Squanto is a prime example of this. What’s the first Thanksgiving without Squanto, right? In this telling, the Pilgrims are surprised by the fact that Squanto can speak English! No doubt they were. But the prose in this books reads toward the middle elementary age level, and I find that at this level it’s perfectly okay – and probably should be encouraged – to tell them the truth. It’s not a secret Squanto knows how to speak English. He was captured and brought to Europe previously.  The real miracle here, is that afterwards, he still trusts Europeans enough to help them.

It isn’t that I think the point should be belabored. Rather, the book is random enough in its account of the story – filling in here and there with things the reader ought to know – that it seems like a no brainer to include this important fact as well. To omit it seems dishonest.

(As a side note? Why isn’t there a Catholic picture book about Squanto? Now that would be an interesting read!)

« Straight and Narrow Path: A Golden Mean?
Fiction: the good, the bad, and the Catholic »