Maximum Ride is a genetic mutant. That is, scientists grafted avian DNA onto human DNA. She is one result. There are others, too. Some are like her, are part of her flock. But others have been genetically engineered in other ways. Some of them are called Erasers. The Flock vs. The Erasers, then. And only the whole world is at stake.

I’m reviewing this book because a few of my friends asked me to.

Ugh. Sometimes I hate my friends. 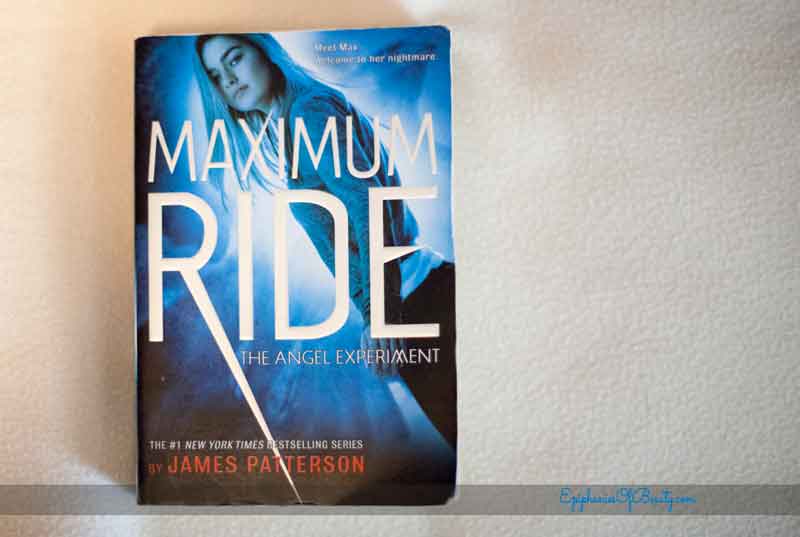 The book reads quickly which is to say the writing is less than stellar. I didn’t have the problem others reviewers had with the language – I think Patterson is good at dialogue. Or, rather, thoughts as there wasn’t a lot of dialogue in the book. A lot of it is Maximum Ride thinking. Which makes for an odd action-adventure book, don’t you think?

Anyway, there is some odd dialog/thoughts with weird choice of words. But most of that struck me as the main character being sarcastic.

In the first part of the book, the point of view switches between Maximum Ride and other members of her flock. Necessary, because she’s not there to narrate to us. But not done well. There were a few places where there was a nuance of Maximum (let’s just call her Max, now, okay?) still relaying to us the events even though she wasn’t there.

As far as content, I can’t make up my mind. There are instances in the book where characters make immoral choices and then justify it to us, the readers. For example, one of the flock boys, Gasman, blows some Erasers up. He feels bad but comforts himself in revenge (99). See Gasman is supposed to be a good guy. And he’s are lecturing us on…relativity. I don’t like that. Firstly, because the book is teaching. Secondly because it’s teaching immorality.

Later, this happens again when “The Voice” in Max’s head tells her she must save the world. She balks (who wouldn’t!) but he reminds her that “the grown ups are the ones destroying the world” (365). This “Voice” is unreliable, though. He later asks her “is it important to be right? Or is it important to do what’s right?” (382). He’s implying the right answer here. Anyway, this voice is clearly not a reliable source of information and can’t be trusted. Max has a chip inside her, I’m thinking a particular “whitecoat”/scientist is this “voice.” Obviously, not reliable.

I bring that up, to point out the difference. The first example is troublesome to me, the second not so much.

There is some talk of God, too. I mean, aside from the constant God-as-expletive that’s going on. The flock enter a church. They pray for virtues. Not specifically, they aren’t praying for “faith, hope, love, fortitude…”, but what they are praying for…is virtue in action. And they feel peace in that church, St. Patrick Church in New York City. It’s here that Max first realizes she hasn’t ever thought about the existence of God before. And then asks the perennial “if God exists why is there evil” question, only with relevance to the storyline: “Would God have let the whitecoats at the school do what they had done to us?” (308).

More disturbingly, “the flock” goes to a toy story (it’s a subtle name change on the great big gigantic expensive one in NYC) and begin to explore and “have fun”, as per “the voice.” Max looks at all the games in the store, and the Ouiga board catches her eye. She dismisses it as something “‘spirits’ are supposed to guide across the board, pointing to certain letters, but everyone knows it’s really the kids doing it” (283). And then the board proceeds to spell out “save the world” to her. It’s not “spirits” telling her to do this. We’re pretty sure it’s the scientists that are doing this – but I am not a fan of dismissing that “game” in any way shape or form. Ew! Ick!

I was going to say that none of this gets in the way of teenagers wanting a really fast and easy – adventurous – read. But the Ouija board gets me here. I hate that thing.

I can see the appeal. The suggested audience in 12 and up, and I can’t see that the average 12 year old would be scandalized by anything in here.

« Epiphanies of Beauty: It’s November!
Art is a moral activity »