It’s been three  years since the accident. Three years since Adam promised Mia he would do anything – anything! – if she would just stay. Three years and they live on opposite coasts. The truth is, they couldn’t be further apart. Until chance brings them together for one evening.

I  enjoyed If I Stay, so you can understand my eagerness to read the sequel.  Of course I wanted to know Where She Went after she woke up.

But. You’ll forgive me, the entire book can be summed up by this… 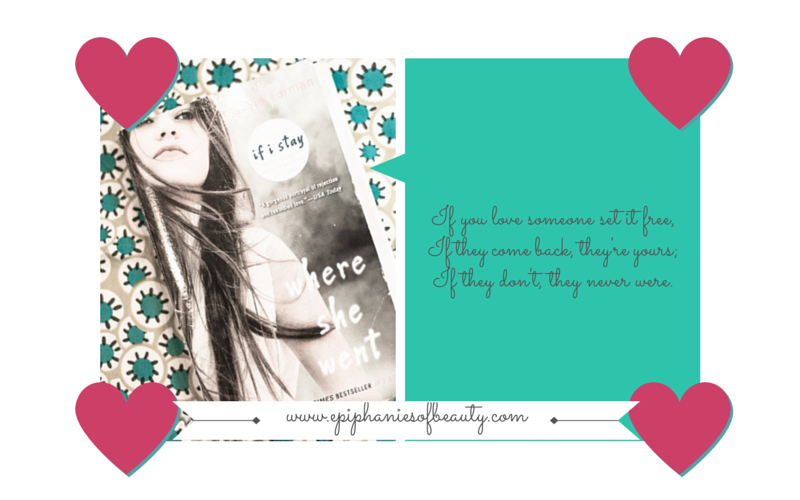 I’m afraid it’s true. That’s what I was left with. That glib little anecdote that graces unicorn pictures and rainbow and balloons.

This book is told from the point of view of Adam.  He has lost all interest in music now that Mia is out of his life. He is famous – really really famous – but music is nothing to him without her.  In fact, life is nothing to him now and thus his anxiety forces him to pop prescription anti-depressants/anti-anxiety/sleeping pills like they’re sweet tarts.  He is morose and hates life and his career and his friends.

Until this chance meeting in New York when Adam buys a seat to listen to Mia play. Afterwards, Mia calls him backstage and they go off to tour New York at night together.  The entire books takes place over the course of 24 hours or so. It’s painful to read. To watch these two young twenty somethings dance around the edge of “do you love me still?” and “yes I love you still” while eating, taking ferry rides, escaping from fans, bowling, and arguing.

It read like a romance. So it was interesting. But not life changing. And over in a hurry. And a let down as a sequel to If I Stay.

Also, this book is written for a more mature audience than the prequel, If I Stay (see below for the nitty grity)

« Epiphanies of Beauty (photo link up) fall edition
Between the Lines: Virtue (humility) »