It’s summer in Missouri and young Drew has come to stay with his Aunt Blythe in her ancient, run down house. Cowardly by nature, Drew is immediately spooked by movement in the upstairs window. But it isn’t until the next day when a tour of the attic leads him to discover a leather bag full of marbles and a note of warning for whomever takes the bag. But the bag of marbles are old, right? And long forgotten? Or are they a link to the mysterious past of Aunt Blythe’s old house? 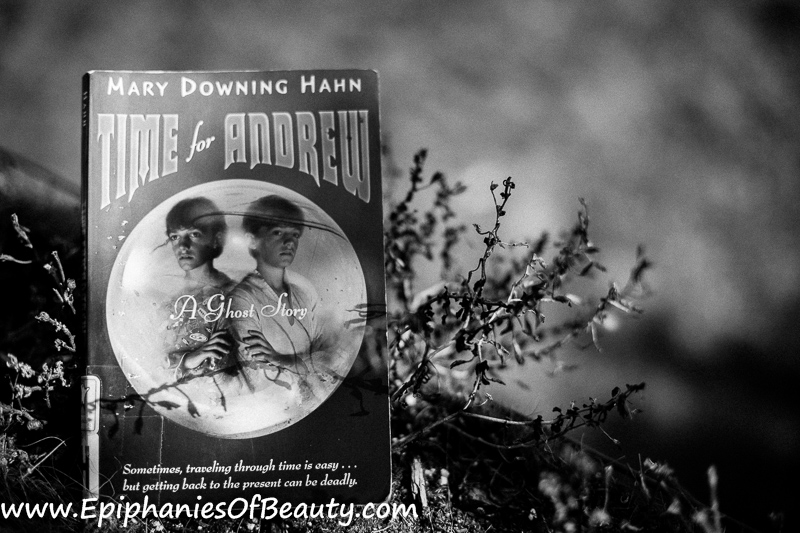 I picked up this book on a whim. I don’t know how I came across it, but I was looking for good, middle school fiction that would be a good read for the Halloween season. Also, it fit the bill for the RIP reading challenge I decided to participate in.

Originally  written in 1994, “Time for Andrew” doesn’t contain any details that would turn a modern reader off. The details are found in the past…but I’m getting ahead, er, behind myself.

Y’all, this book is suspenseful! I’m going to let you in on my secret book coping strategy – and some of you are going to hate me for it – but sometimes I jump ahead and read the last page or so of the book. “So” being a generally small or large portion as the book demands. But yes. This book was so suspenseful for me in the first five chapters, I had to jump ahead and read a few of the last pages so that I would know everything would work okay in the end {blush}. Sensitive kids don’t need to miss out on this book. Just have them follow my lead.

YOU won’t have to do that. I’m here to tell you everything works out in the end. See, Andrew has come to the future to retrieve his marbles and make good on his threat to the thief who stole them. But modern day Drew realizes that what Andrew really needs back, is his life. So the two virtually identical boys who happen to share a name decide to switch places.

Easy enough right? Maybe, but 1910 Andrew is an aggressive bully and he won’t go back to his time period until Drew can beat him in a game of marbles. And Drew is a coward, afraid of his own shadow and barely knows what a game of marbles is let alone how to play a game. And to make matters worse, the longer the boys live in a different time period, the more they become each other and the less they remember about themselves.

Will Drew learn how to play a game of marbles soon enough? And will he ever be able to beat Andrew at his own game? Or will the boys be stuck in an alternative time period forever? I’m sure you know the answer. But I loved how the story took the opportunity to for both boys to learn how to be better boys from each other. Without being preachy. Totally satisfying.

No peeking! I told you it was going to work out in the end! Your girls will like the story for the “parent trap” switcheroo factor. Your boys will like it because the protagonists are very real, rough and tumble boys.

Just, don’t let them read the first five chapters right before they go to bed.

« Death by W.B. Yeats
In the Beginning was The End »