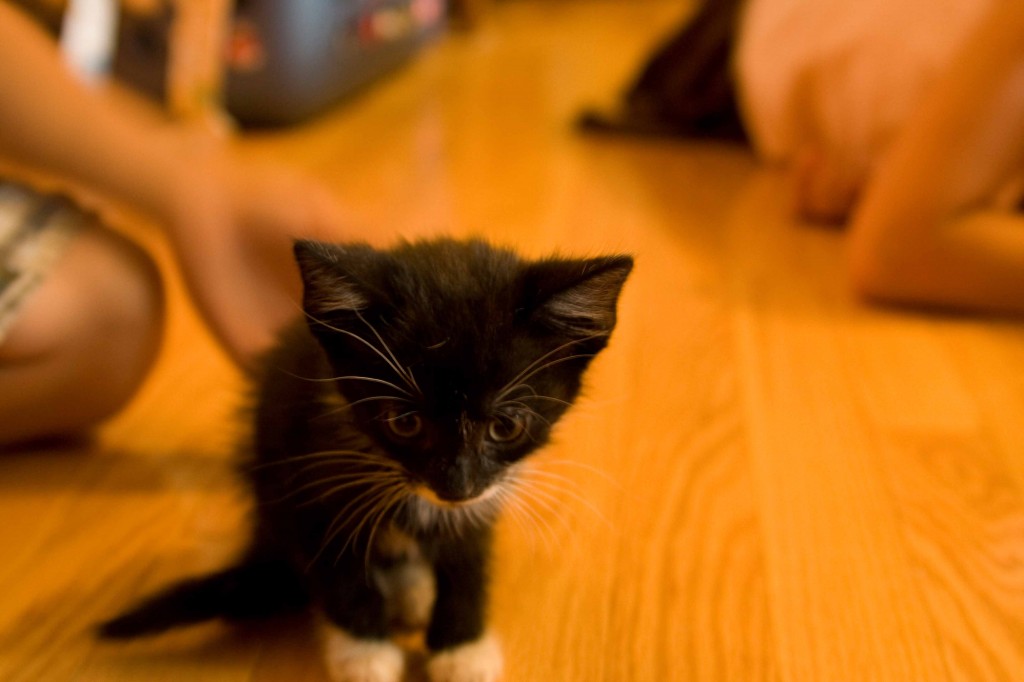 Kitty was here only a short while. It was discovered that our dog is just too good in that which she has been bred: hunting.

To avoid ripped up floors or doors and the unspeakable “other” tragedy, Kitty went back to the farm where she came from. It was a long, 10 minute ride full of sobs and tears in a van filled with broken hearts.

And when it was over. And as we pulled out of the driveway – sobs long since subsided at seeing the happy reunion between kitten and mama cat and brothers and sisters (and a really cool playset) – my husband commended the children. He commended them for doing the right thing. For making a hard decision when it was there for the struggling.

Mr. March does this in Little Women, too. He has returned from war and it is the end of the year – a very hard year for the March’s. He speaks to each child, in turn, and commends her growth in the struggles of the past year.  The girls respond with a bit of pride at virtue being recognized at its appearance (however miserable enduring its presence was).

No my husband hasn’t been reading Alcott as of late. No, its not on the agenda.

Marmee March is, of course, excellent in holding her daughters’ hands as they walk through this befuddling life here on earth. She does it with such grace and poise, I want to go back and read again and again and again and again. As if, by reading Little Women I might pick up some virtue by osmosis. I think Marmee would have handled the cat better.

My husband was able to do it without reading a novel. In spite of himself, he has latent Catholic tendencies.

With me, these virtues aren’t formed. I’m coming to believe they come in the trying times. The times when you need most to exercise a virtue but you don’t feel you are really able to – the virtue hasn’t. quite. formed. yet. And then its a struggle and a wrestling to the ground until I (hopefully) can stand up and brush off, victorious. I think its then I realize, that it the virtue was there. Not through osmosis, but in its practice.

And I see, plainly, my shortcomings in this. These little building blocks of the faith that I haven’t realized were important to commit memory.

And its here the argument becomes cyclical and I must remove myself from the computer. I don’t have them committed to memory. They are not so much a part of me that I can easily recognize them outside of myself.

So I turn to my Holy Mother. The best model of virtue I know. And I pick up a book. And a pen and paper. I struggle and wrestle so that next time a kitten leaves, or a friend hurts, or anger flares – I’ll be ready.

« a bouquet
Four books and a sweater »